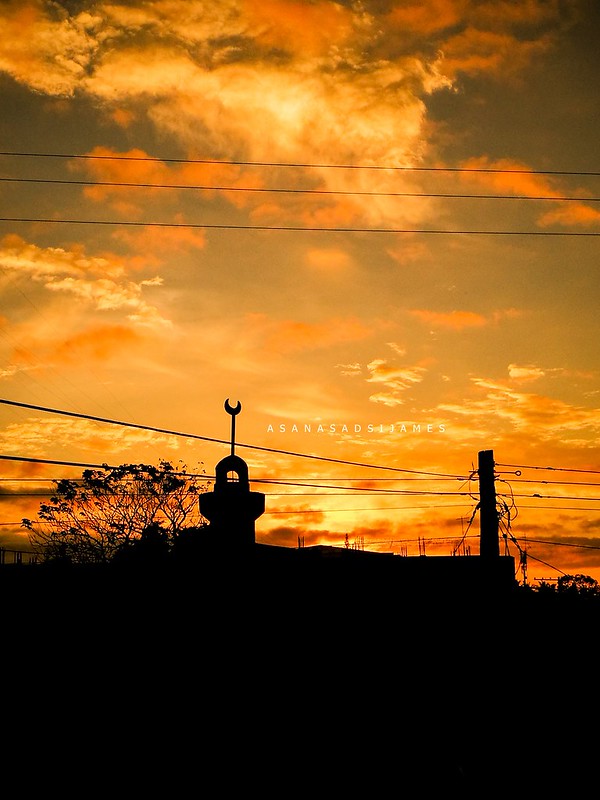 On our commute to the first mosque, we opted to ride up a jeepney going to Brgy. Kalanganan and alight on the intersection going to the mosque. Then, transfer to habal-habal where we haggled the price going to The Grand Mosque. 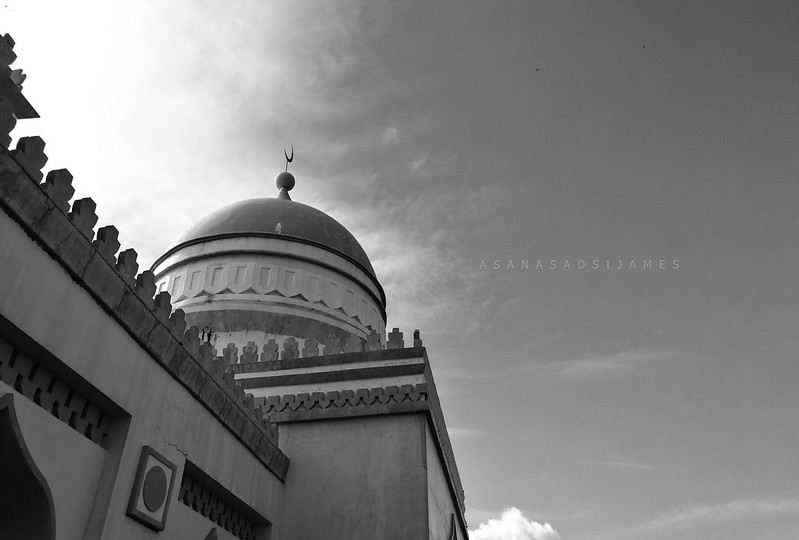 We passed several communities. It’s peaceful and the breeze was gentle while our faces were bathed on the scorching sun. Along the paved highway, the place gradually changed into more of an Islamic community where several small mosques evidently stood on both sides of the road. Men on their long white robes and skullcap sported with curly beards can be seen pasturing their farm animals. It’s their everyday routine. It’s a scene that I cannot see every day. The longer the ride, the more it becomes a foreign place to me. 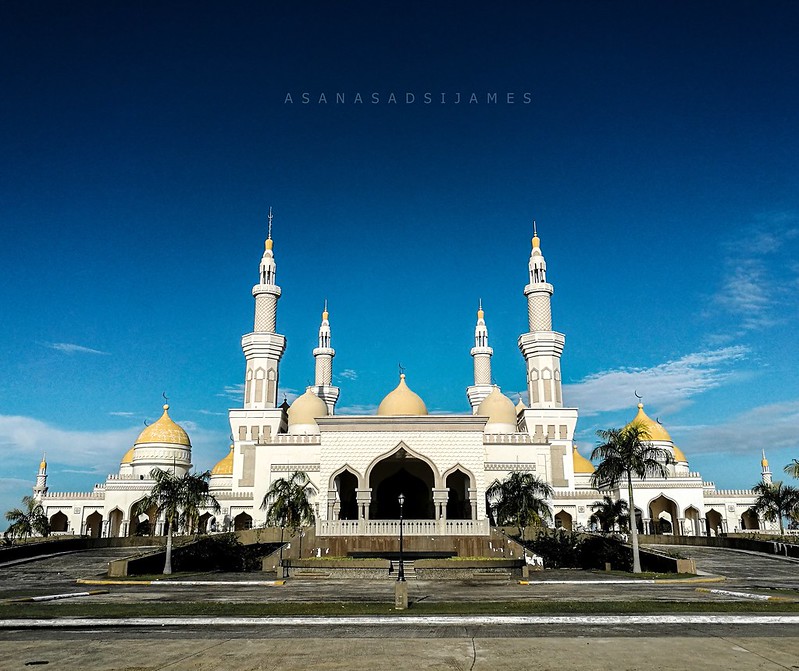 When we got there, we were overwhelmed by how peaceful and quiet the place was. We talked in almost about whispering manner. Still, I was simmering in excitement as I took a glance at the Grand Mosque amidst the negativities that branded the place by mass media. We are all still a little taken aback by orderliness, cleanliness and quiet nature of the place. Prior to our visit, we dressed appropriately according to Islamic custom and for us to respect the place and to immerse in their religion. We were the only ones in the vicinity. We began our tour by walking straight to the middle of the courtyard. 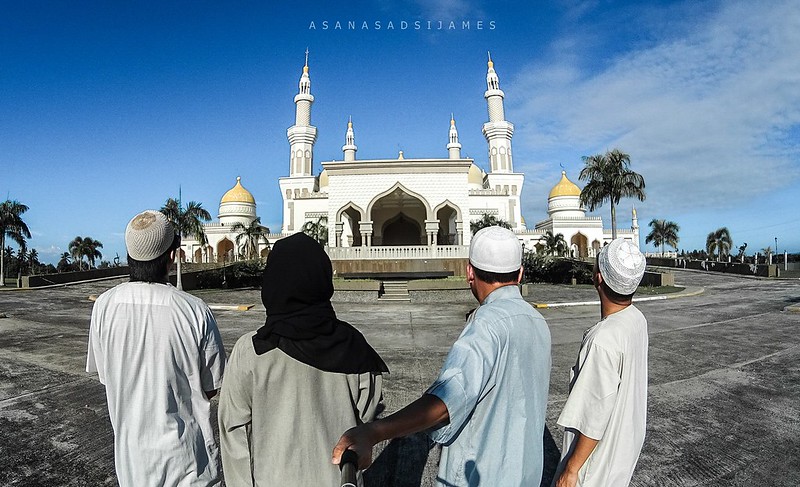 Upon entering the said mosque, you can feel relaxation, peacefulness, and solemnity. It is so imposing and grandiose from the outside and the inside is a picture of holiness. From the center of the courtyard, against the clear blue skies and windswept white clouds, the imposing Islamic building provides a postcard-like material with grandeur painted all over it. It’s magnificently beautiful! 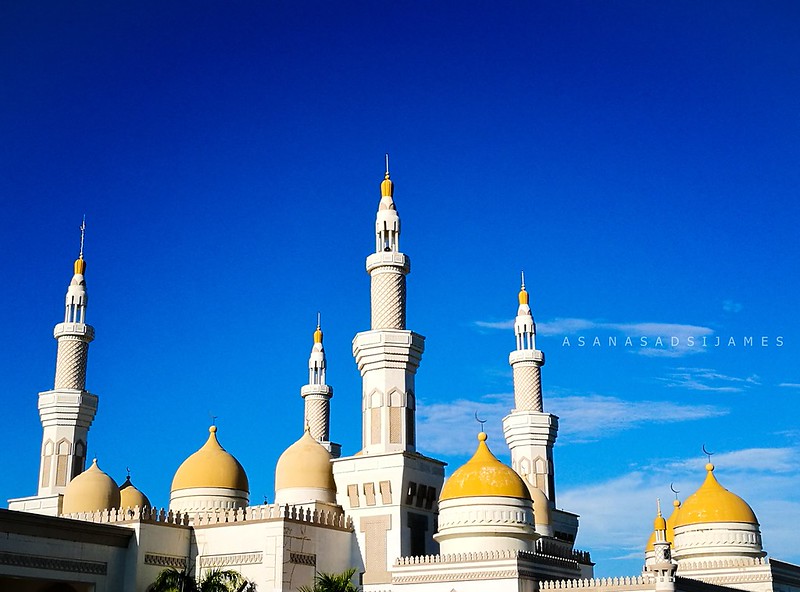 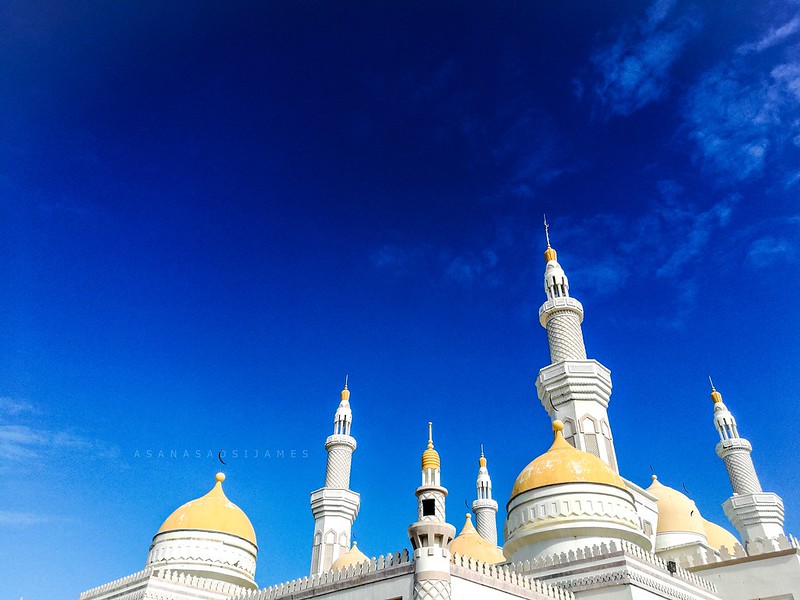 Its huge domes and towering minarets on white structure, and its near to perfection symmetrical architecture had our eyes feasted with wonders. This Islamic structure is decorated with geometric patterns made meticulously, from its cream-colored walls to every corner of the mosque. These emphasize symbolism, using intricate geometric, stellate, or vegetal motifs to create breathtaking patterns meant to awe and inspire. The minarets are composed of loudspeakers on its top from which the call to prayer is announced surrounded by eight columns and projecting stalactite cornice. The gold-painted crescent moons soaring on top of each dome are bedazzling from afar. Standing from this huge facade, it made me even more excited and eager to explore the inside of this huge Islamic monument. 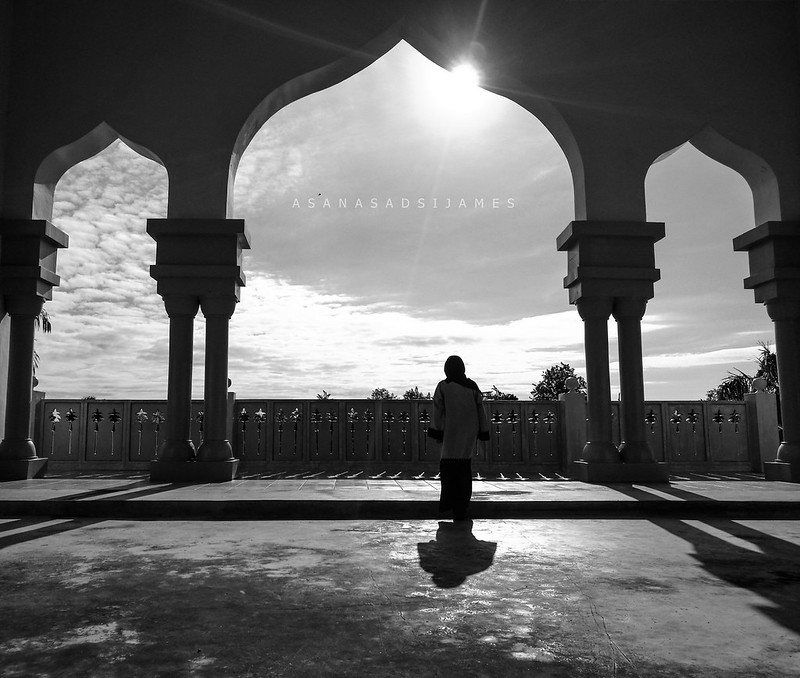 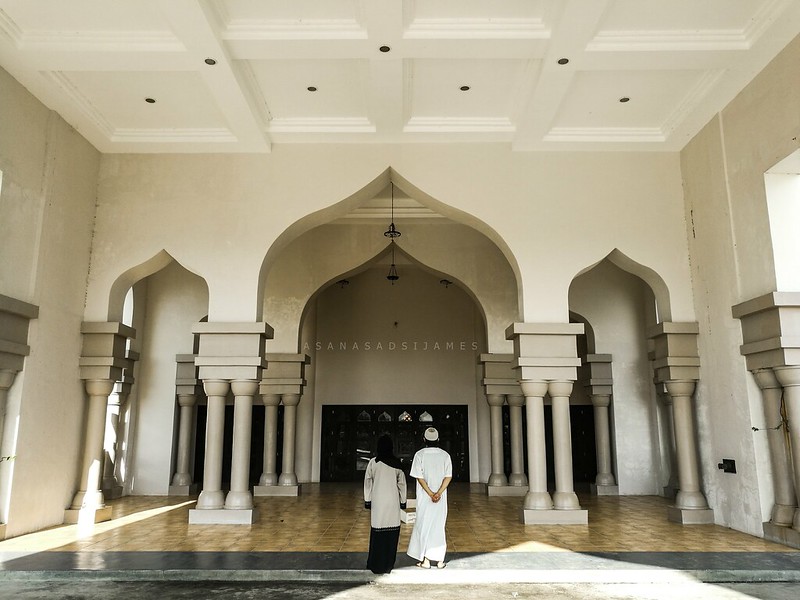 As someone from another faith, I’m excited to witness someone practicing their faith in God. Sadly, that time, the prayer hall is closed and non-muslim people cannot enter the hall. But still, I can picture out our Muslim brethren kneeling deep in prayer and staidly commune with God on their prayer rugs. I get the picture how our Muslim brethren amend themselves through spirituality. How splendid it would be if we witness them on their faithful state inside the Grand Mosque, a perfect place for rest and reflection. 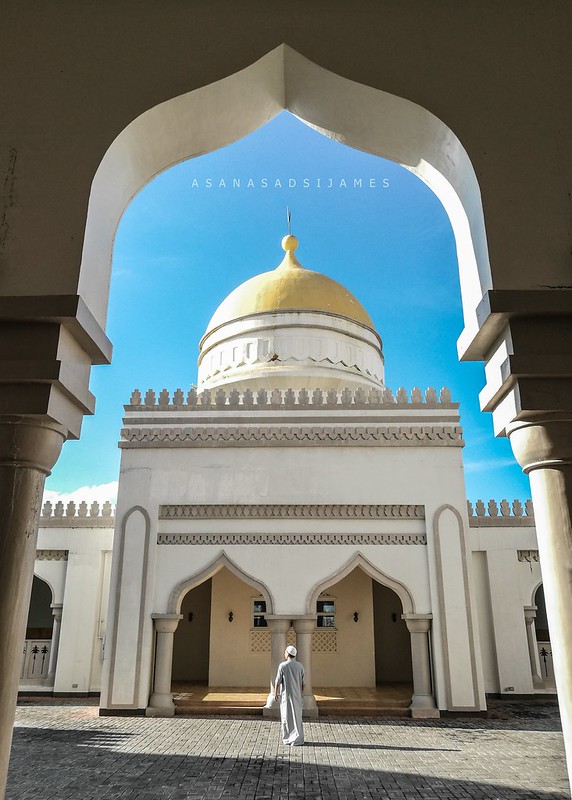 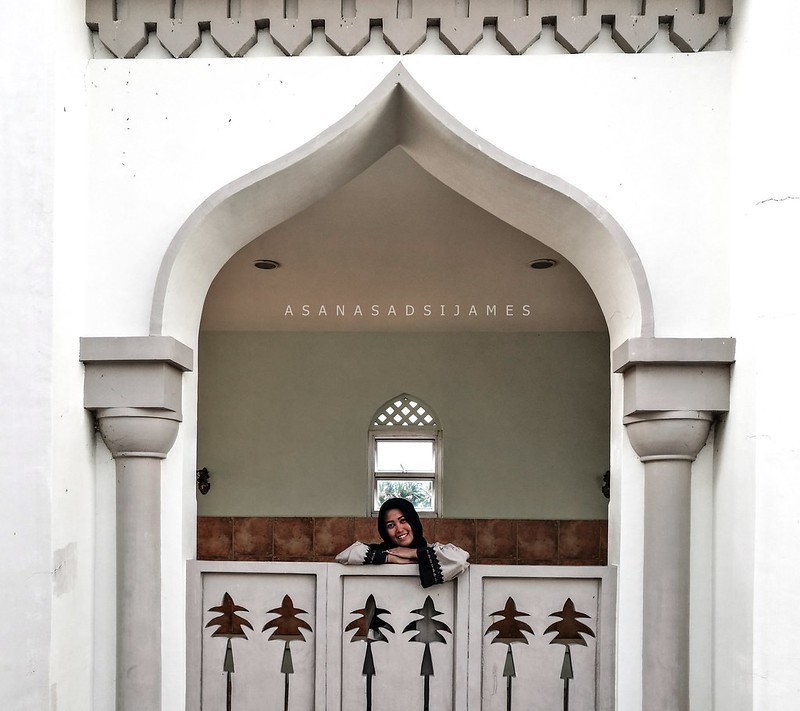 Standing in the hallways, we were dwarfed by the architectural beauty of this structure. It made us feel like we were in an Islamic country like we were foreign wanderers venturing on a foreign land. All the corners of our line of sight are aesthetically pleasing and the intricate designs are all in symmetry. Colossal yet very admiring. 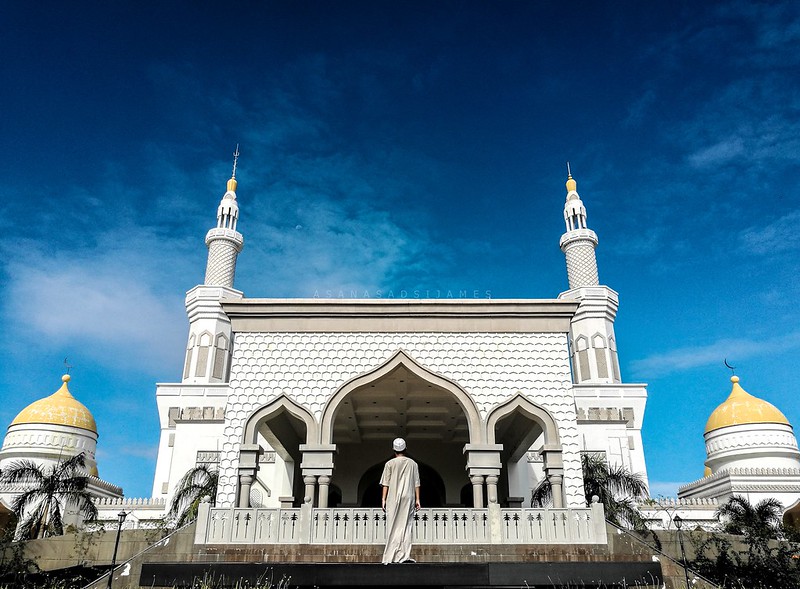 As we were preparing to leave, I took a last good picture of me with the Grand Mosque as a backdrop. Timing was a friend on that instance, the wind blew softly from my right side creating folds and curves on my Islamic clothes. It’s as if a magical wind flow of Islam spirit converge with me as I found a new spirituality. I wonder if it’s the same spirit that converges with our Muslim brethren on this mosque daily. Sure thing, the relentless devotion of the faithful are blessed. Nevertheless, it was a wonderful experience for us non-Muslims. It was an eye-opener for us from another faith where we’re Muslims for a day.

NEXT MOSQUE: The Pink Mosque

HOW TO GET TO THE GRAND MOSQUE

Lies some kilometers away from city center, Sultan Haji Hassanal Bolkiah Masjid, famously known as The Grand Mosque, stands in the middle of a vast land surrounded by the bodies of water of Tamontaka River and Moro Gulf and now serves as the center of Islamic faith in Mindanao. The nearest airport to get here would be Cotabato City Airport in Maguindanao province flying from Cebu, Manila, and Zamboanga City. 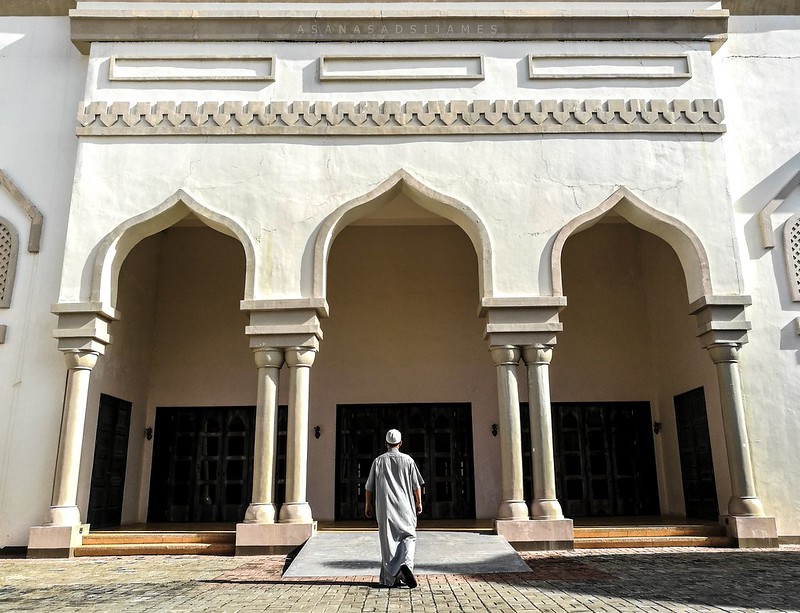 Here’s a sample itinerary to get to The Grand Mosque with Cotabato City as our starting point. 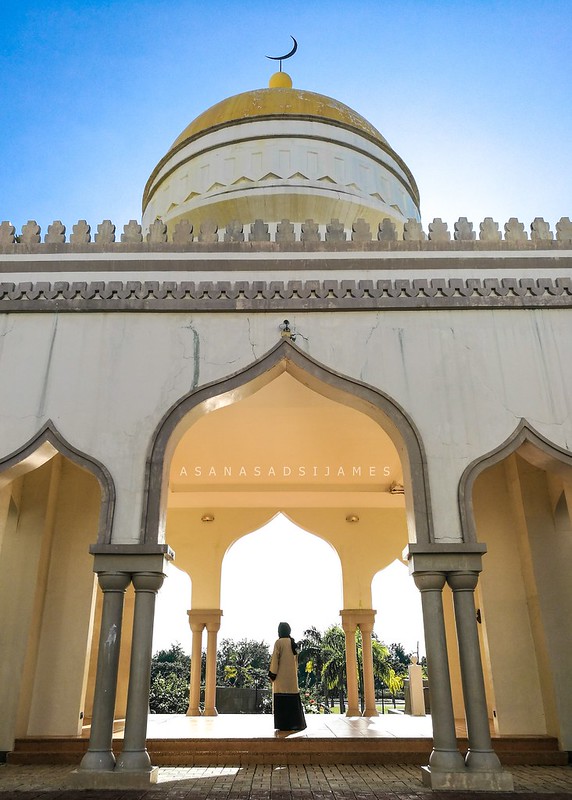 Souvenirs, plane tickets, and other miscellaneous fees are not included.

***We forgot to give donations for the mosque. 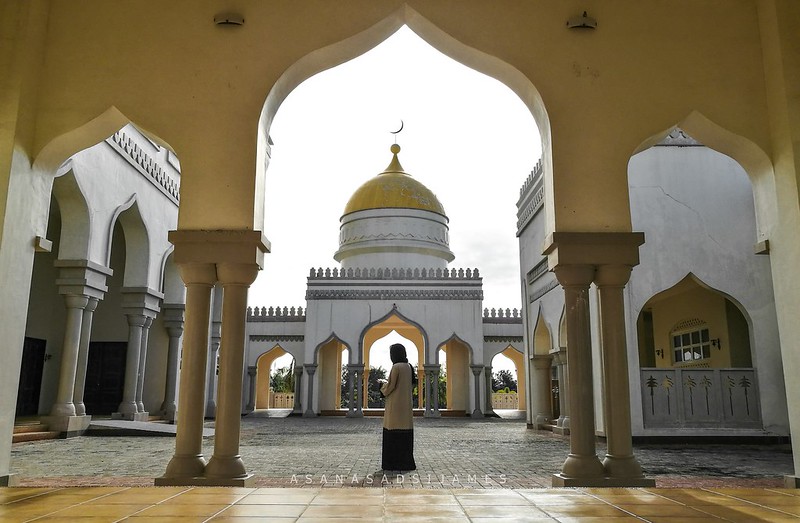