Our an hour journey seems to be awkwardly silent. Tired, maybe. But subconsciously, we know why. We’re heading out to Maguindanao — maybe one of the danger zones in the Philippines. Men in camouflage uniforms armed with rifles drawn from their shoulder down to their chest were seen engaging safety measures on every checkpoint we passed by. Few locals, more men in uniform. And there’s me, sitting like a cute potato on the couch of our van realizing it’s already too late to back out. Only the brave or the crazy ones can possibly think of exploring this province. Certainly, I know where we stand. We stand on both.

Honestly, I still got a hangover from our experience on The Grand Mosque. The same feeling as we’re heading to Maguindanao. The skyline of every town was punctuated with towering minarets and crescent moons on onion-shaped domes instead of church belfries. Not a trace of Hispanic architecture or any Hispanic elements being said that the Philippines was colonized for several hundred years way back. Not even names of the towns or any streets are Spanish-sounding and it’s totally devoid of colonial-era buildings. Just typical concrete and Arabic inspired religious structures. Majority of the people are dressed in Islamic clothing, which if ever we’re able to socialize with the group will make us very conspicuous among them.

THE SYMBOL OF THE PINK MOSQUE 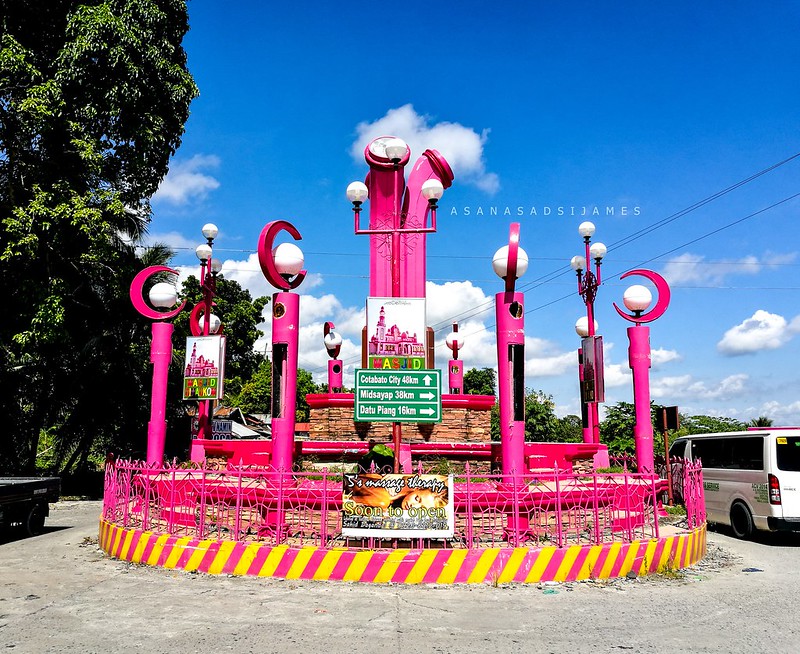 Mere minutes from stepping out of the junction of Datu Saudi Ampatuan, the curious eyes of the locals welcomed us, maybe glared with disdain. Ignored, we proceeded to the Pink Mosque. When we got there, we found the mosque near empty with only a handful of personnel maintaining or maybe guarding the premises. The caretakers didn’t bother with us entering the premises. With the mosque’s bright pink color, it is the perfect picture of peace and love in Maguindanao. 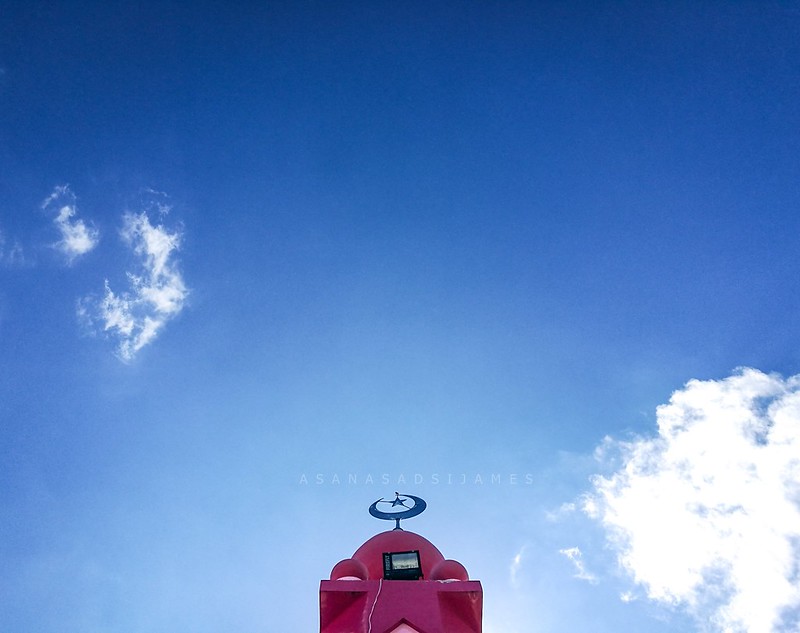 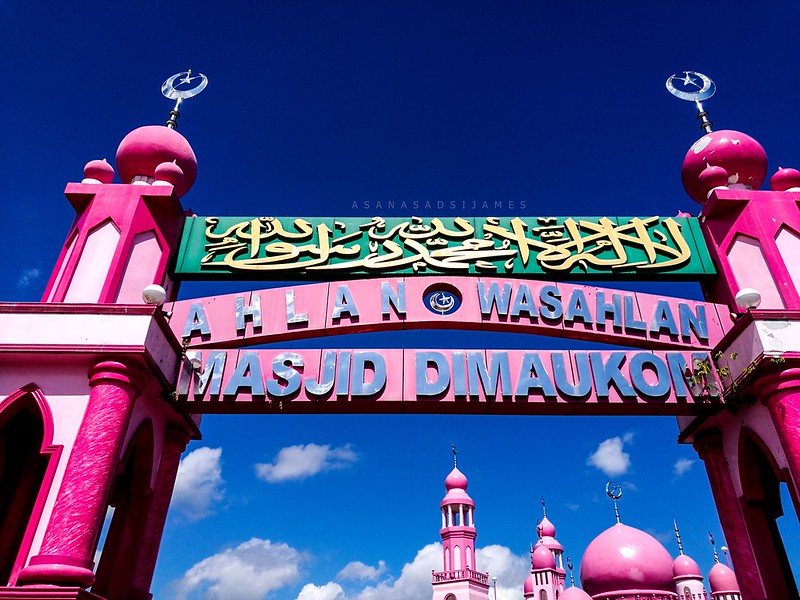 For most, the color pink is a symbol of femininity. And while many associates this color as such, in many foreign cultures, this has more colorful meaning. In Japan, pink associates more to men than women. In Korean culture, it symbolizes trust. In Latin America, it’s symbolic of architecture. And in Maguindanao, it is a perfect picture of peace and love. The Pink Mosque of Maguindanao is one of the few pink mosques around the globe along with the famous pink mosques of Nasir ol Molk Mosque of Iran and Putra Mosque of Malaysia. Behind its color, it is their Mayor’s and his wife’s favorite color because they believe that pink is the color of peace and harmony. 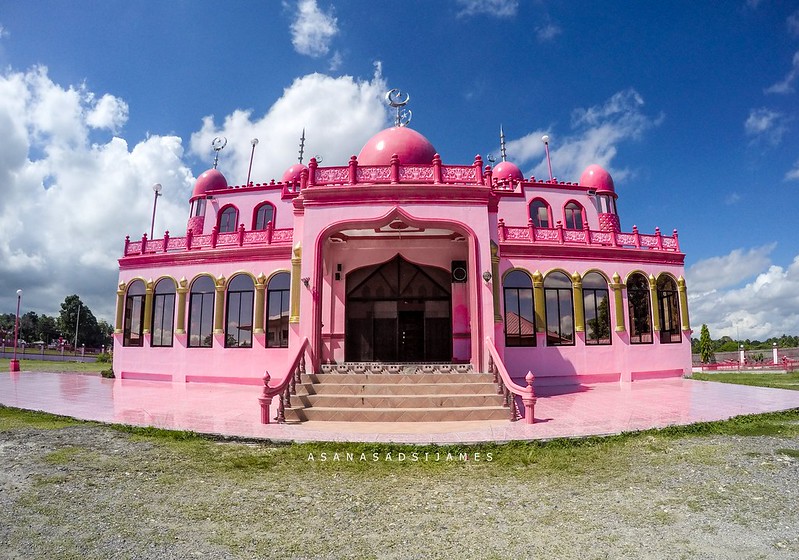 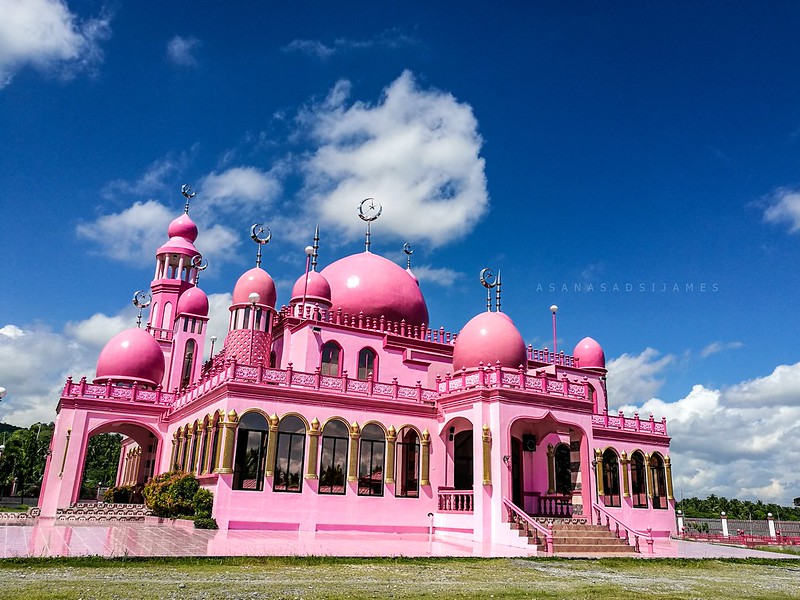 As the sun was out with its full force that day, the mosque was bursting its pink color with the sky on its full color of blue as a perfect backdrop. Staring at it from a fine shade nearby, I can’t help but gaze with astonishment by this Islamic structure. It is outlined with aesthetic geometric shapes and curves, and with intricate designs of subtle silver and golden touches that effectuates an outstanding image even by a passerby on the highway of Datu Saudi Ampatuan. 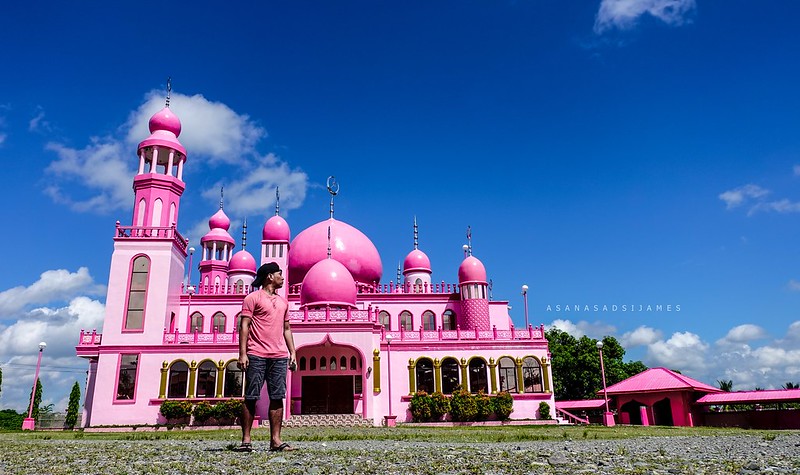 Like from The Grand Mosque, we didn’t witness our Muslim brethren worshipping inside the Pink Mosque. I was stuck in interest whether some will wear a pink colored Islamic clothing. As I observe while walking near the mosque, some Muslims, mostly women, wore pink clothes and even pink hijabs. It would be pleasing if we had witnessed them on such Islamic clothing on their prayer rugs. 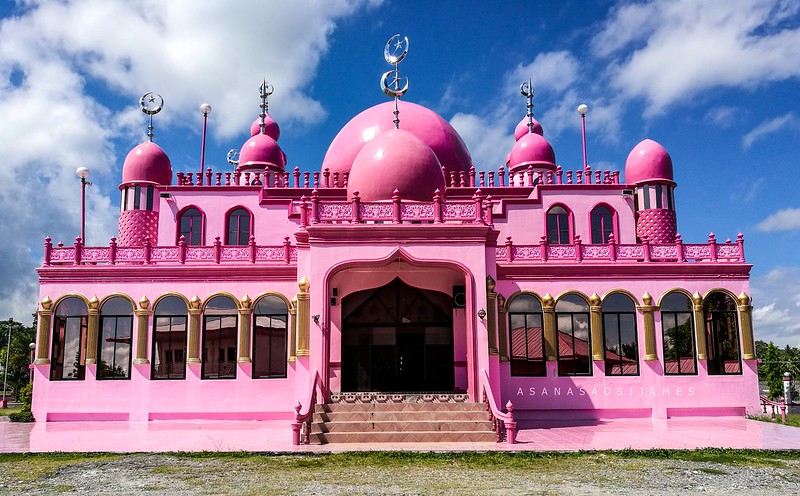 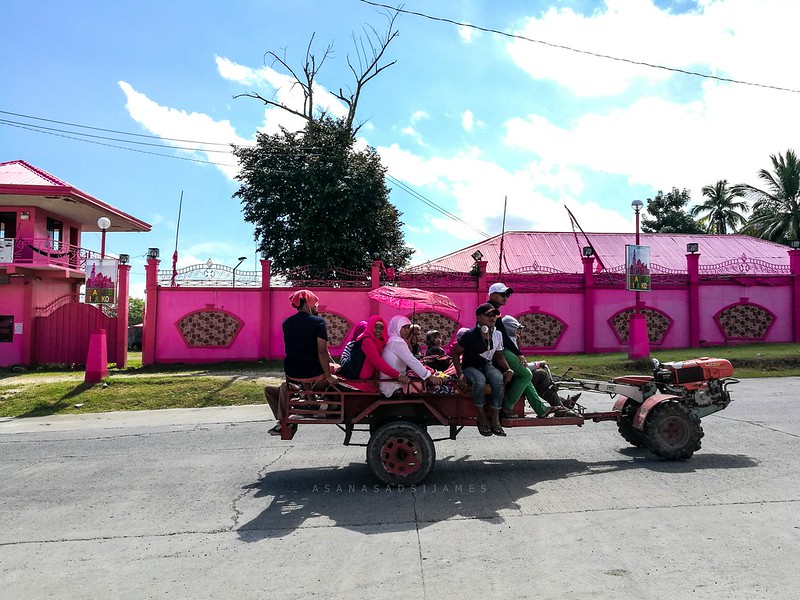 For me that belongs to a different religion, I still feel a great spirituality that conceals the whole place. The blissful quiet and the air that grazed our very skin accompanied us throughout the whole experience like how Allah guided our Muslim brethren. We found a new stream of interests and even piqued our curiosity while chasing The Grand Mosque and the Pink Mosque. Our Muslim culture goes beyond words and any mainstream media. It takes open-minded individuals to take the paths to these religious structures and experience it by themselves firsthand.

A HOPE FOR THE PINK MOSQUE 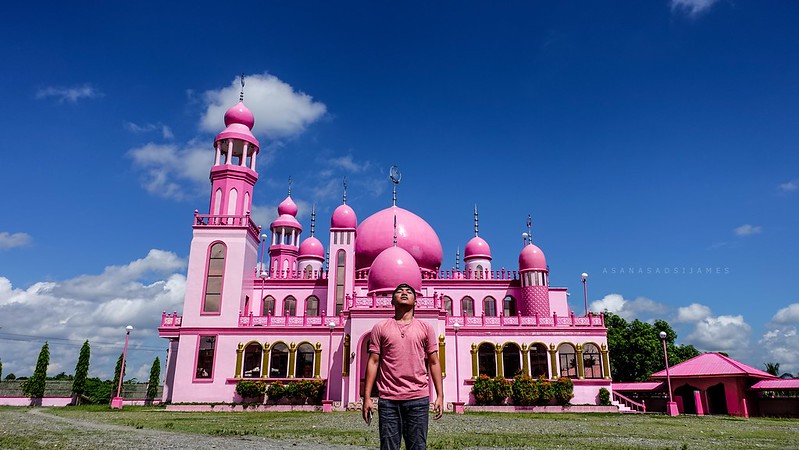 As we set our foot one after the other on the gates of the Pink Mosque, there goes again the burning eyes of the locals. We felt their eyes daggering straight to our soul coming from all direction. Imagine, four people carrying humungous bags strolling in the street of Datu Saudi Ampatuan. That made us a more obvious target for kidnapping. Four people who are foreign to their lands and come easily walking on their streets as if it’s like their own living rooms. They might think we’re crazy. Crazy enough to break the walls of dangers. Crazy enough to walk straight to their town and be vulnerable to possible abductions. And it comes to my senses. They may wonder how brave we are to come visit their homeland amidst the tirades of misconceptions of the people. 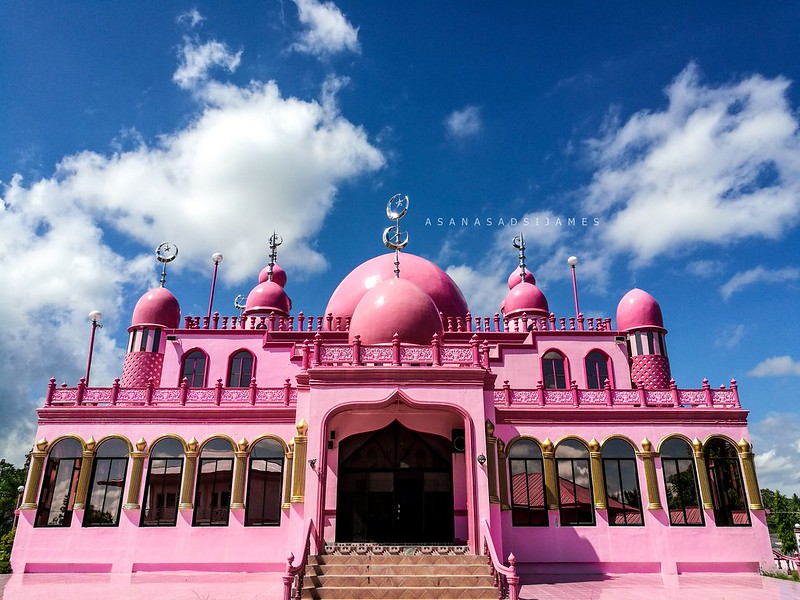 This, however, didn’t bother us. I know, there’s still hope in changing the notorious image of Maguindanao. I hope that the Pink Mosque will serve as a catalyst for that. Because I believe that there’s a lot of golden hearts than what we hear in the news.

HOW TO GET TO THE GRAND MOSQUE 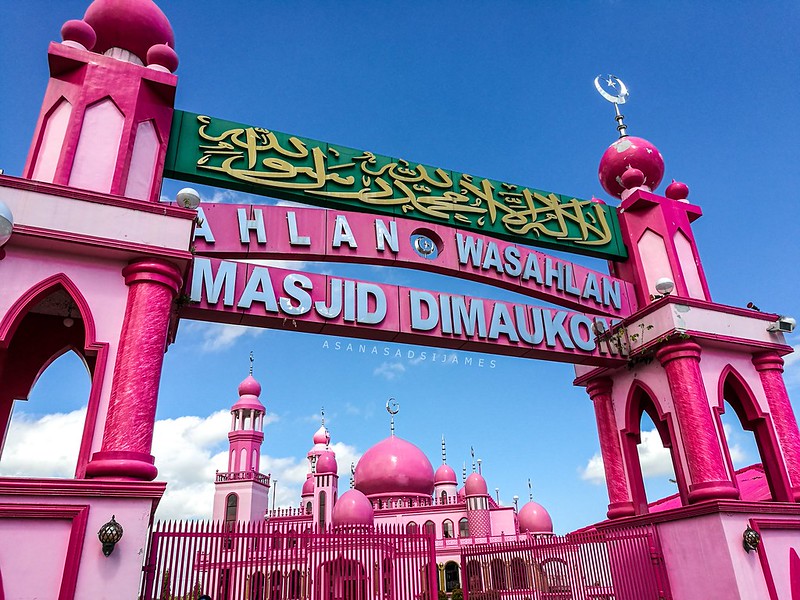 Located in the heart of Datu Saudi Ampatuan, the nearest airport to get here would be Cotabato City Airport in Maguindanao province flying from Cebu, Manila, and Zamboanga City. 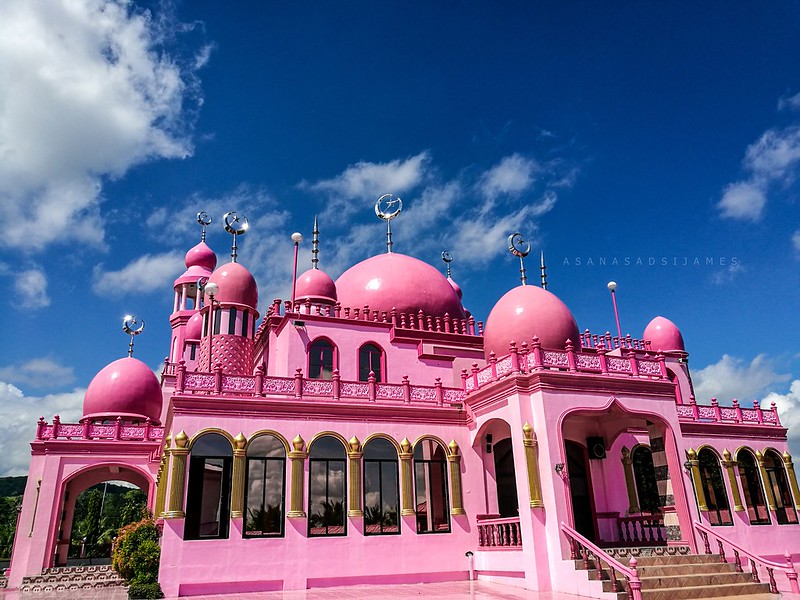 Here’s a sample itinerary to get to the Pink Mosque with it as our second stop in Chasing Mosques. 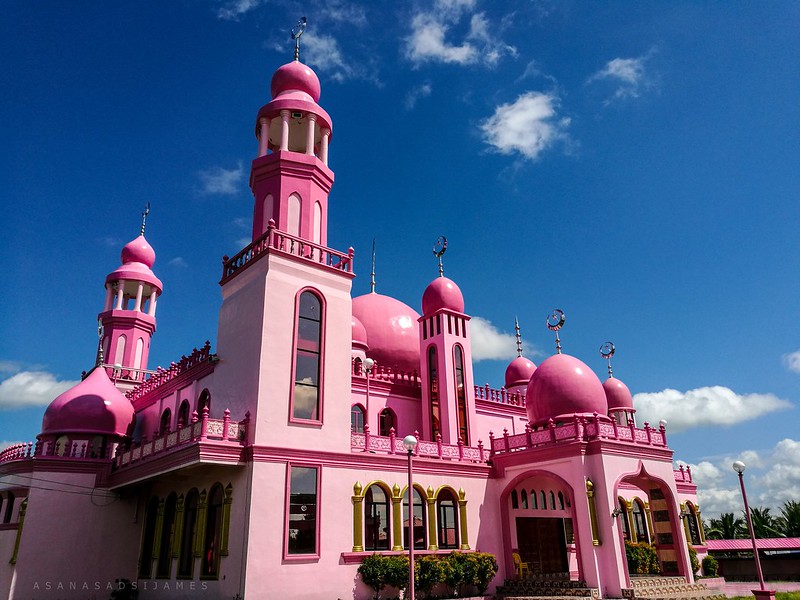 Souvenirs, plane tickets, and other miscellaneous fees are excluded. 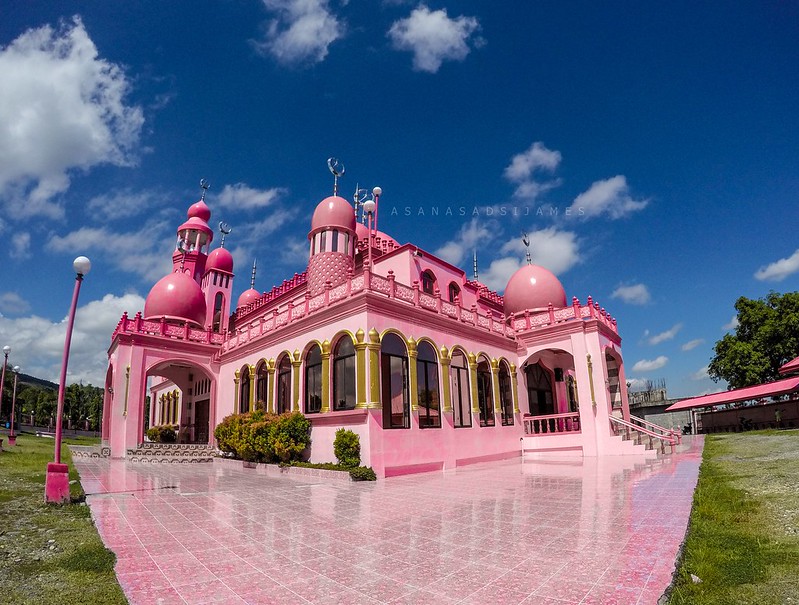