Ever wonder what is it like to be stranded on a tribe of hunters in the middle of the forest? I had been — stranded and even spent a night in the village. And no, it’s nowhere near what you could’ve ever thought of.

It’s the most immersive experience I had so far. Oneness with the tribe and nature. It filled my stay with stories of hopes, dreams, and inspirations. Being there was a completely different feeling. 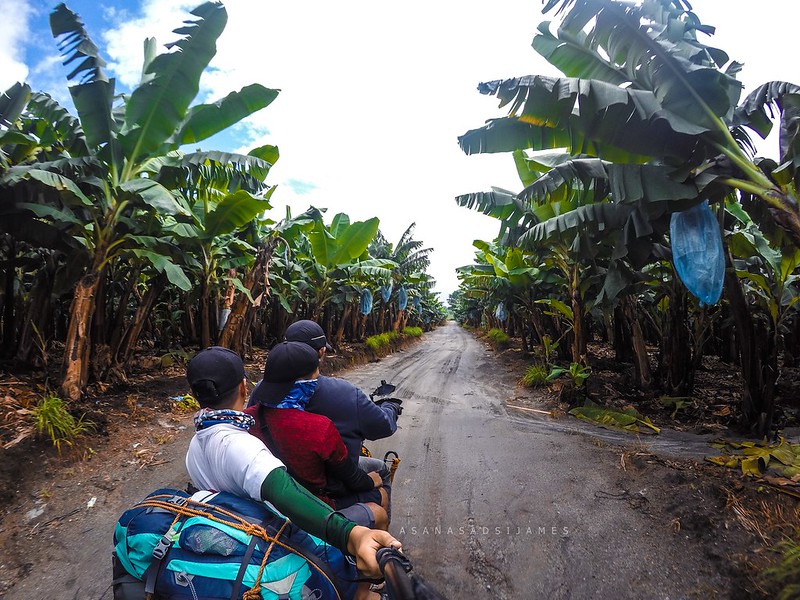 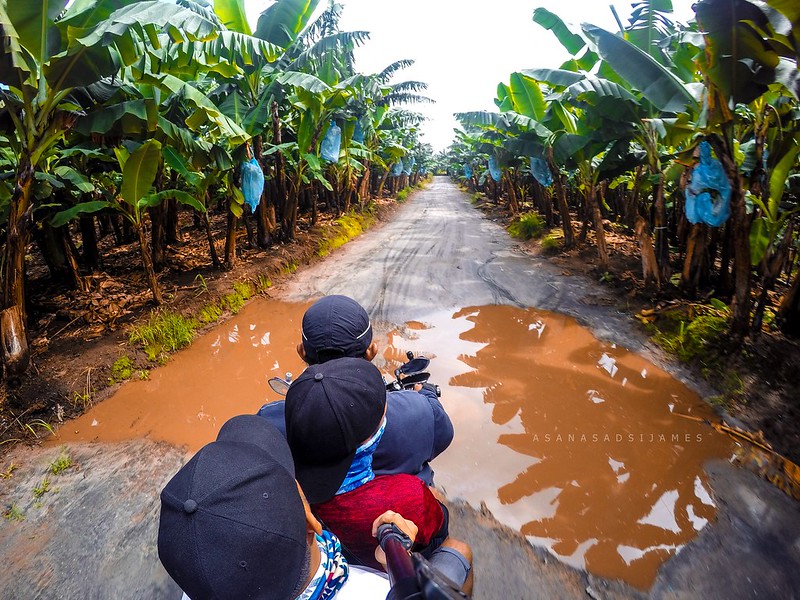 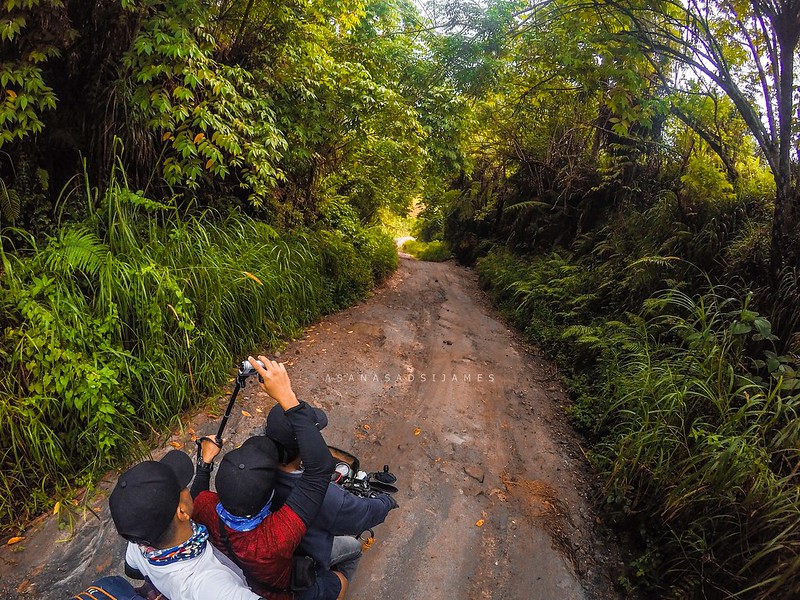 From the tourism office, the habal-habal cruised down from a straight and narrow paved highway in the town proper into a twisting and unforgiving one, sometimes sandy but rocks and bumps most of the time, passing by some labyrinth-like plantations of banana and pineapple with sudden uphills looming over the desolate drive. I often wonder how our driver familiarized these perplexing roads. The views weren’t any different every after twists and turns — such wonder. 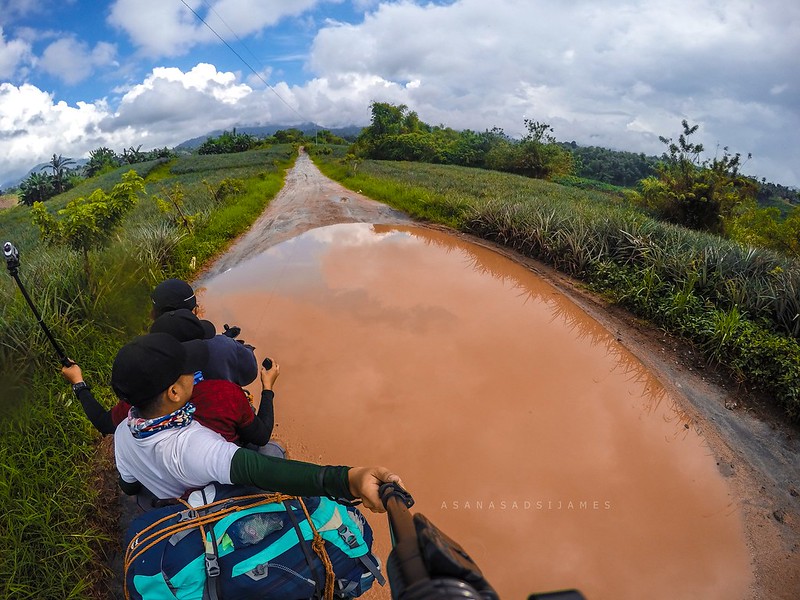 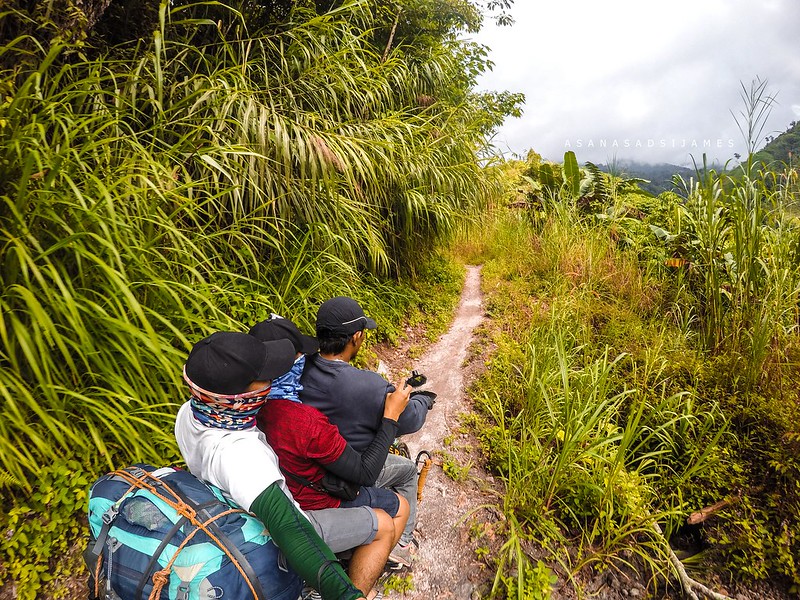 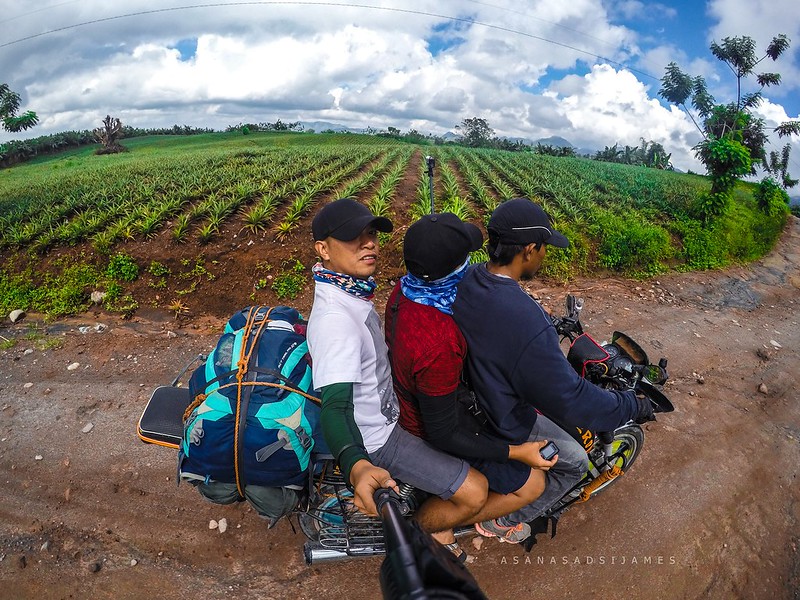 Occasionally there was a boscage that separated the plantations until we were brought to an unforgiving expanse of barren and rocky roads with sturdy plants and trees thriving on both sides. Sometimes, our habal-habal skidded off the road and into the gully for several times. And most of the time, we were off the habal-habal and left us with our feet on the dirt roads. Damn these rocky 60-degree roads. Poor kuya driver, the roads took a toll on one of his side mirrors. 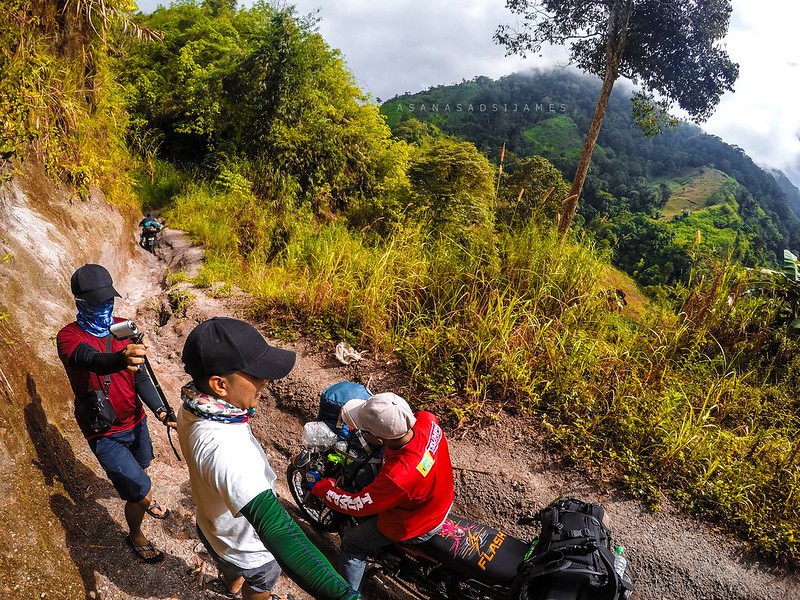 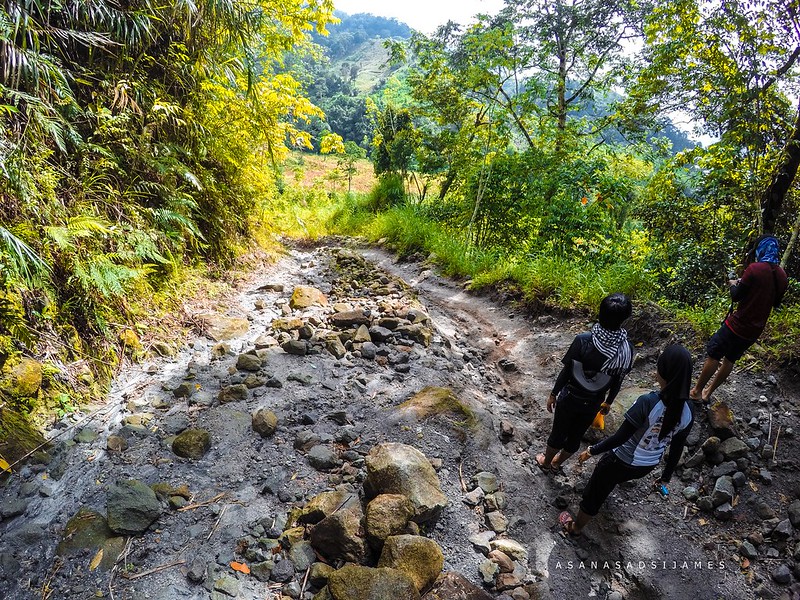 STRANDED AND GROUNDED AT KULE 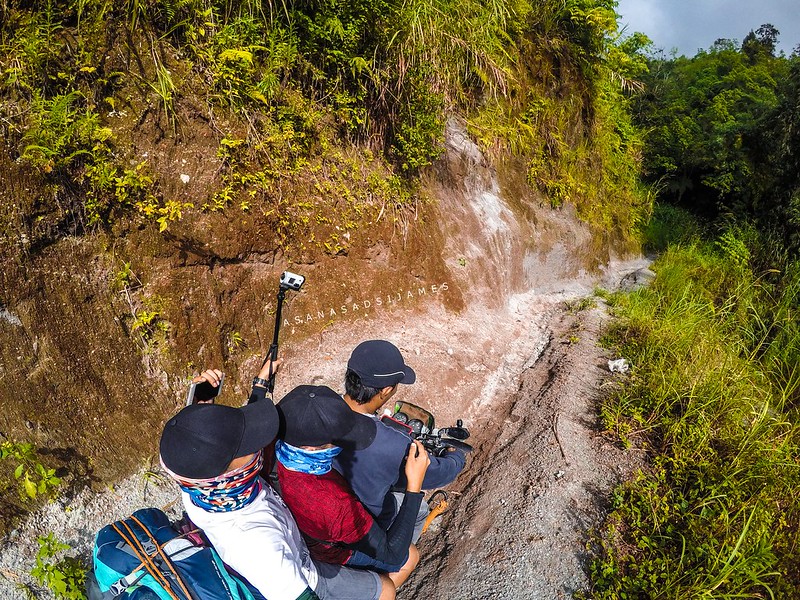 Passing some native huts and villagers on the roads, we arrived at the jumpoff with nary a scratch and the only injury we have is an empty stomach. It’s already an hour past noon when we got there. We stepped off of our habal-habal as dozens of villagers stared at us quizzically. Then, a thin man with a fine facial hair walked forward, introducing himself warmly as David Suanzon. He would be our tour guide today. After some formal introductions, we had our lunch in the receiving area and the bad news came afterward. David strongly suggested canceling our trek due to the bad weather. 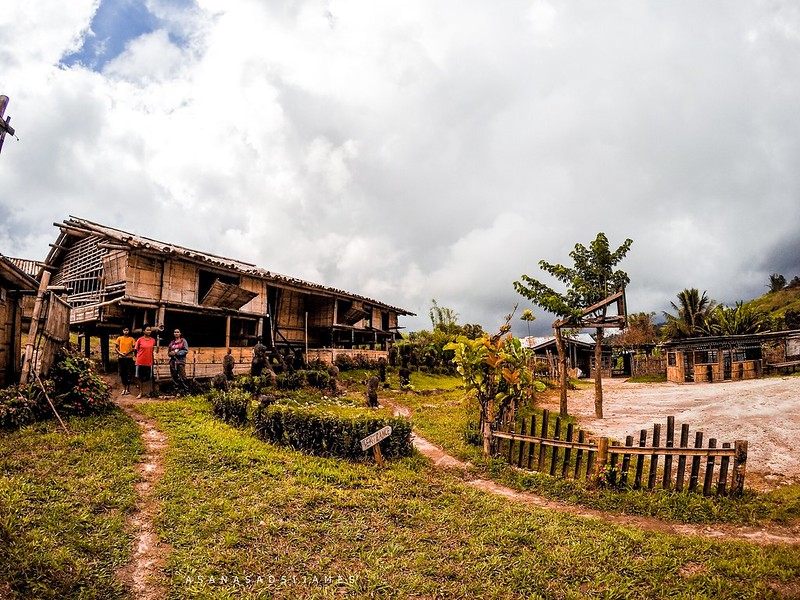 As the cold jewels falling from the sky seeped into the fibers of our shirts, our hopes and excitements came falling down as well that our faces turned sour. David said that during these times, the mountains often got caught with landslides and the thick fog usually blocked the trails that inevitably gives zero visibility. We have no choice but to meet the decision of our guide especially when safety demands the most. He’s more familiar with the mountains here than most of us. He also suggested having a night off here in the village in preparation for tomorrow’s trek. We couldn’t agree more with that shown hospitality. As we carried our bags with heavy remorse, David led us into our homestay near the receiving area. 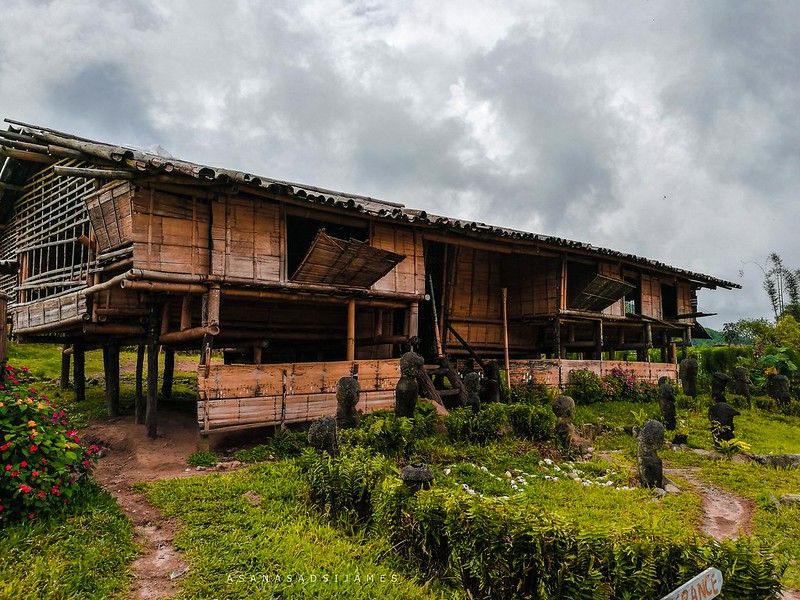 Our homestay is a long communal house used for receiving guests for a night or two. The Tbolis called it Gono Bong which literally means Big House. The Gono Bong is all different in terms of size and style compared to the surrounding houses. Its design is inspired by traditional Tboli house built over the dirt with reclaimed hardwood used as foundations and frames, bamboo floors, halves bamboo piled as roofs, and other natural elements. We made ourselves comfortable inside by sitting near an open and huge demounting window. From that sweet spot, we watched how the dense fog devoured the whole mountain slopes and how this torrential downpour lulled the whole village into a mere slumber. 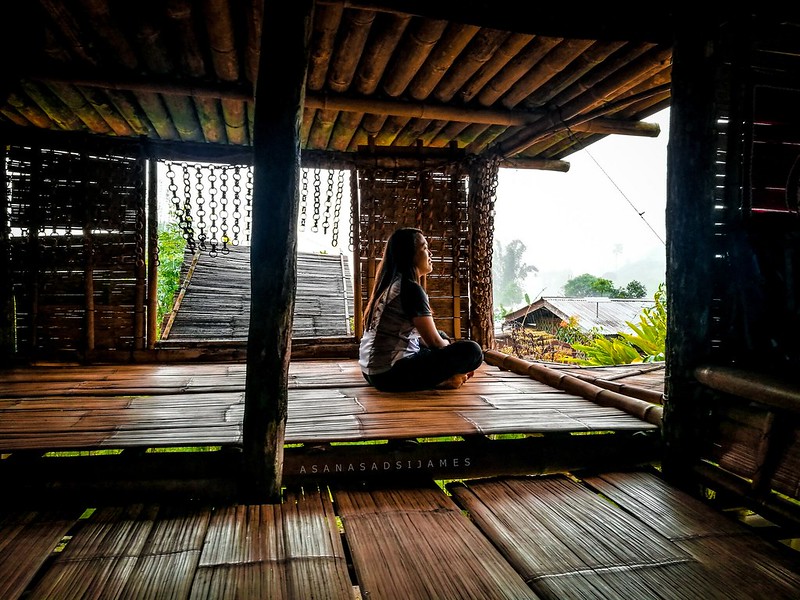 Check out our previous  trip

THE MAN AMONGST THE TRIBE 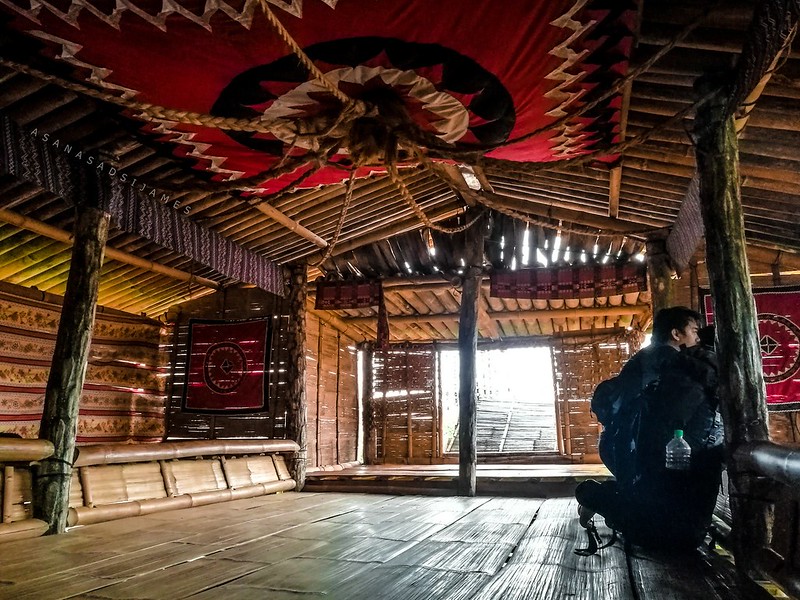 Tucked between the high valleys of Tboli town, Kule becomes the North Pole when it rains hard. I clothed several layers of fabric in hopes to mollify the shivers. The rain squalled raucously outside ironic to the silence prevailing inside the Gono Bong. In stillness, we appreciate how peaceful the village could be, very provincial and nostalgic. The temperature continuously drop. Our breath fogged up while talking and cherishing the serendipitous moment with views of mountains and clouds. 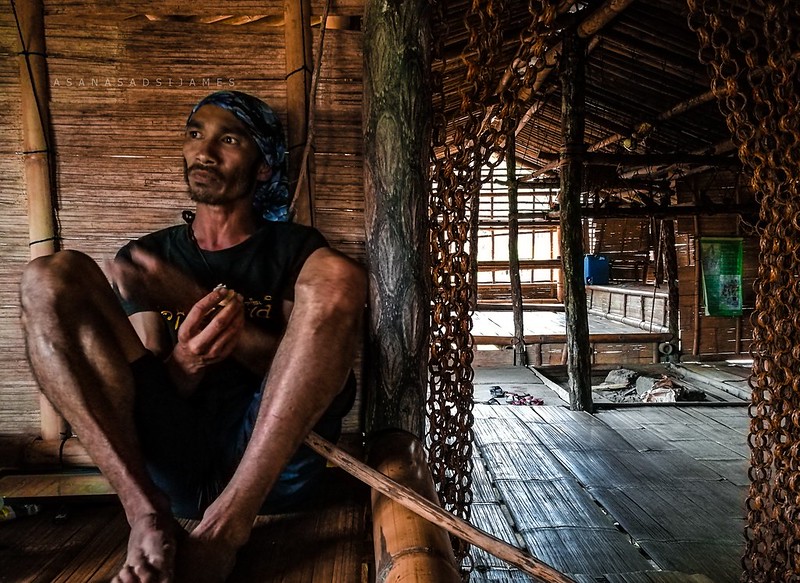 David came with his friend, a local from the tribe, bringing us some merienda (light meal/snack) for the cold and rainy afternoon. They arranged native coffee on bamboo cups and boiled sweet potatoes. That was the first instance of a warm-hearted interaction between them and us, visitors. We helped ourselves and tasted their offerings. I put a grin on my face as I drank the brew. The foresty fragrance of the bamboo cup blended well enough on the earthy aroma of their native coffee that soothed and brought warmth inside the house. 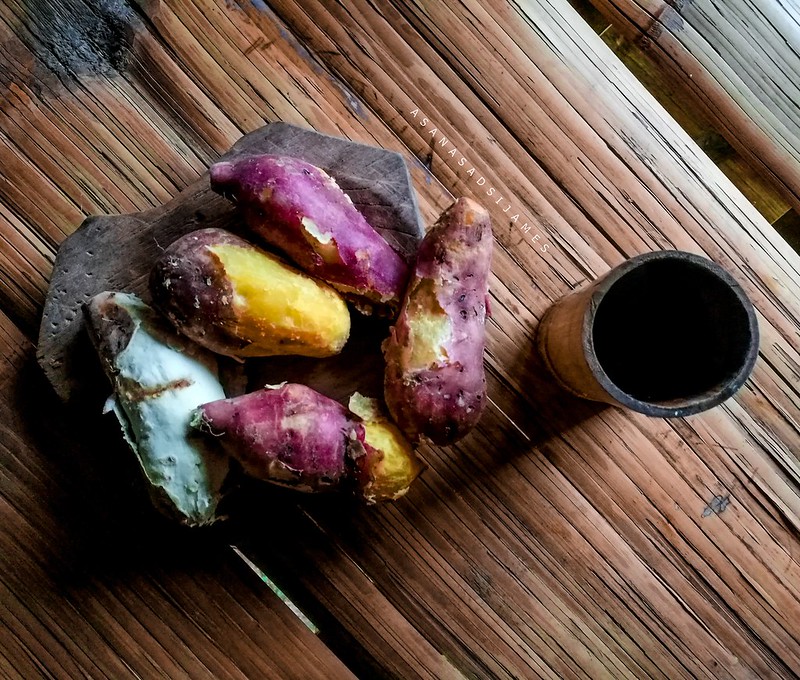 Over this unplanned idyllic retreat, I found myself content simply in the mellow presence in the village of Tboli tribe in Kule. We spent hours in the communal house talking and joking — mostly David, he’s a real talker — more about the lives of Tboli tribe in Kule and his also, tended by bottomless hot native coffee and sweet potatoes. They have myths, history, and legends passed down to generations, right to their own way of life. Often, some stories I couldn’t comprehend provoked fits of laughter. It’s relatively relaxed at the moment, I thought so, probably a lull before the storm. From waves of entertainment progressed to profound dialogues with David. Stories of catastrophes, victories, sacrifices, inspirations, and relentless devotion to Mother Nature and to the Tboli tribe. He also told us stories of grassfires and storms and landslides in the mountain slopes and how he overcame those disasters. And he even narrated a story of how he fell on a cliff during one of the calamities. Maybe I’m skeptical about this but surely, I never met such person as passionate and selfless as David Suanzon. His actions and rectifications through the years of hardships resonate the visible results for the betterment of both Tboli tribe in Kule and the mountains of today.

This brought a greater awareness before me. My thoughts drifted between my vision and I began to perceive questions about my life that had been imperceptible like: Am I doing the right thing in my life today or am I just existing? Did my visionary ripples reach the distant ones and the ones off the tracks? What will I do in my remaining days to make a difference? Those kinds of existential questions I can’t comprehend and attend to. Questions that maybe long existed but I chose to ignore — hidden and unanswered — in the deepest corner of my thoughts. For several minutes, David continued to exchange his sentiments. We were inspired by his works and words and brought new passion and vision for us.

THE TBOLI TRIBE OF KULE 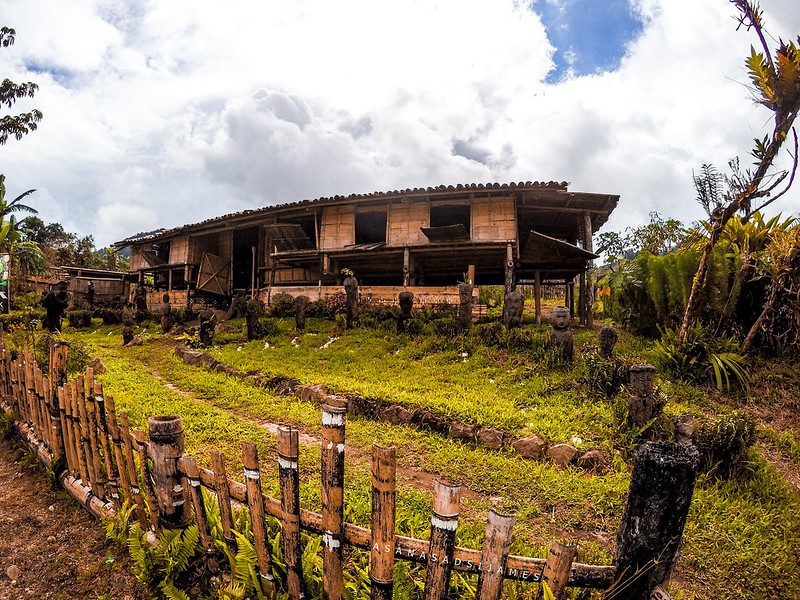 The rain started to calm down and made a clear view of the village from the window. It vivified the barren hills. Wispy fog lingered on the mountains as vaporous exhalations of the virgin forest. Dew-studded plants glistened by the fine sunlight. David invited us to meet some villagers outside. We gladly accepted his invitation and strolled around. He shared us about the livelihood of Tboli tribe in Kule. Here, the Tboli ancestors were farmers but they’re famously known as a group of fierce hunters that coursed the deep mountains of Tboli town. Unlike their sibling tribe in Lake Sebu, they mainly rely on the resources found in the mountains thus the inception of their beliefs in spirits or guardians in the mountain of Melibengoy. But now, old age has passed. They rely on something else now. They made more space from valleys and evergreen forests for their crops and farmlands and mainly adapted modernization through several tourism programs. 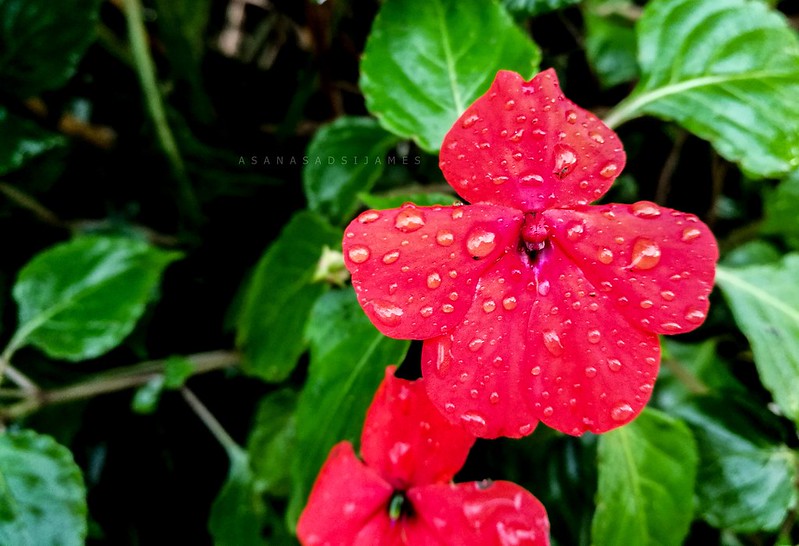 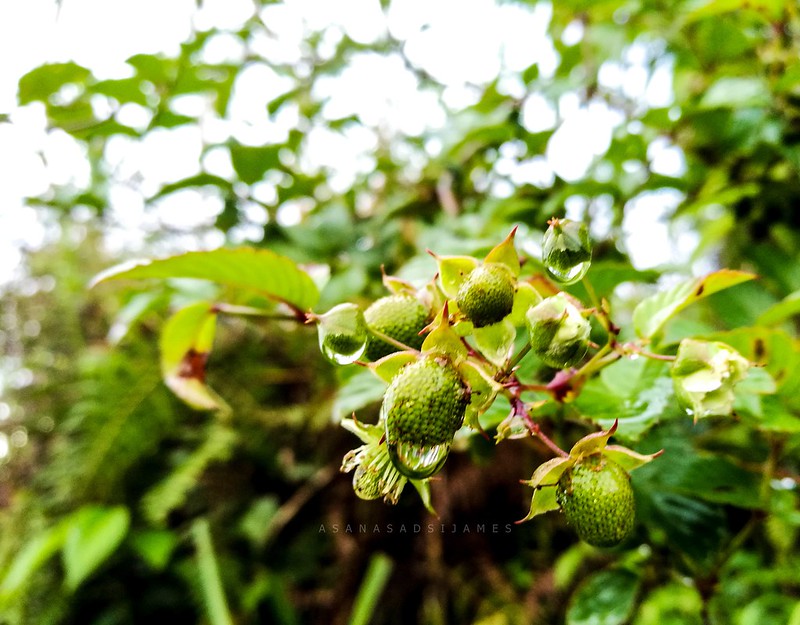 The latter served as a bridge to the outside world that made Tboli people exposed their genuine traits. And noticeably, the tribespeople is among the friendliest and simplest people I had met. They live as one community and if you’re on their land, they would consider you as one of them. That is what I felt about them. The people were so kind, warm, and welcoming and always wearing a smile on their faces. 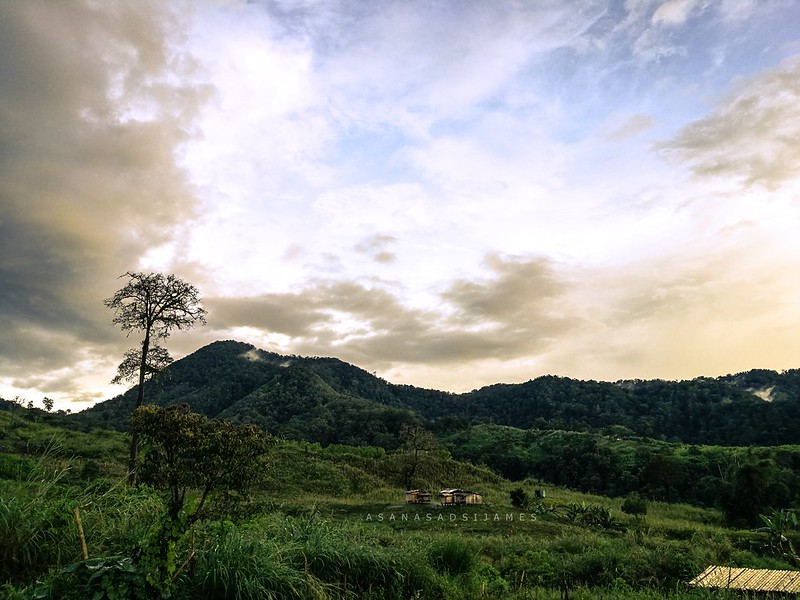 From afar, villagers spoke their tongue as they stretched and waved their hands inviting us into their respective humble homes. I couldn’t decipher all the words but I knew those were words of respect and that warm hospitality clearly defines their rich culture and innate life. “H’yu k’mul!” the only word I comprehended which means good afternoon. They really love meeting tourists. 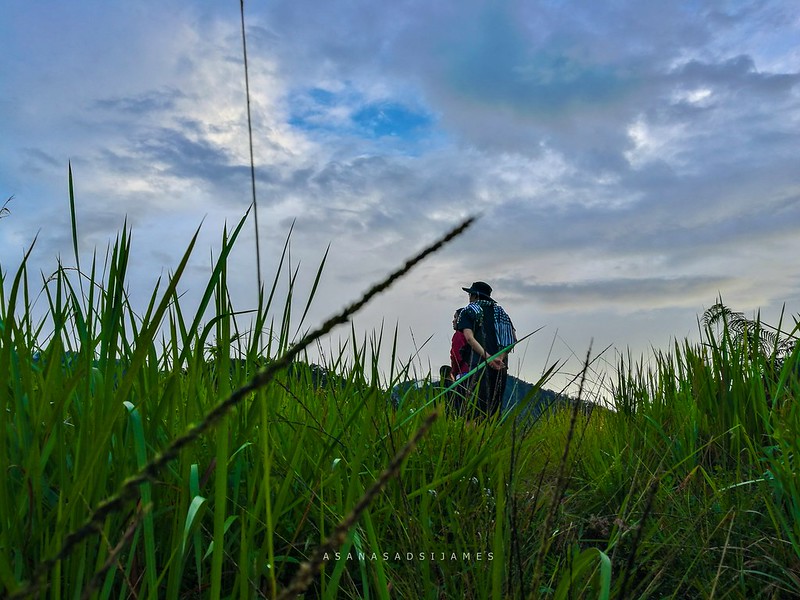 Check out our previous  trip 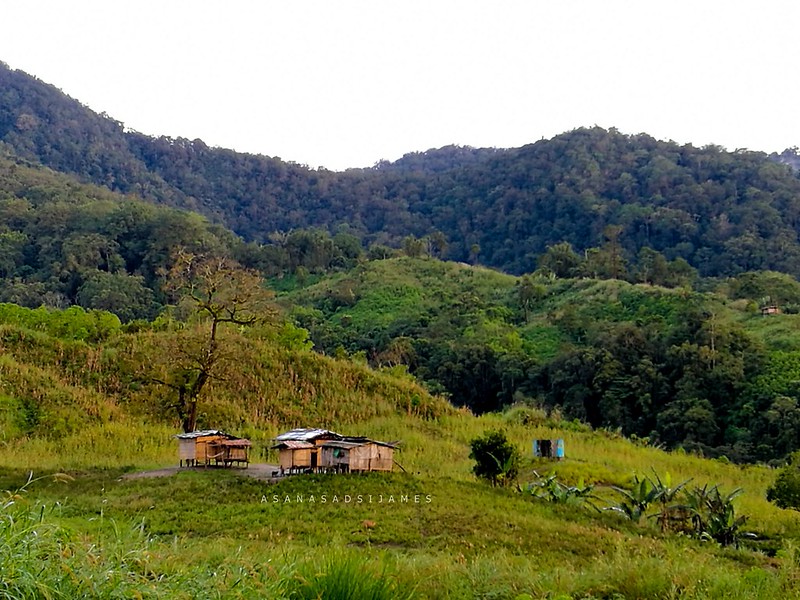 Honestly, I was so devasted with the series of mishaps we had before we got here and I thought it was only the Lake Holon that could singly patch the whole inside my heart. I was then spellbound by the kindness and goodness of the tribe that my heart could literally melt from my chest. In a nick of time, I grew so attached to the village. I wish I could stay longer. I wish we’ll be stranded for a few more days. But, reality demands itself. 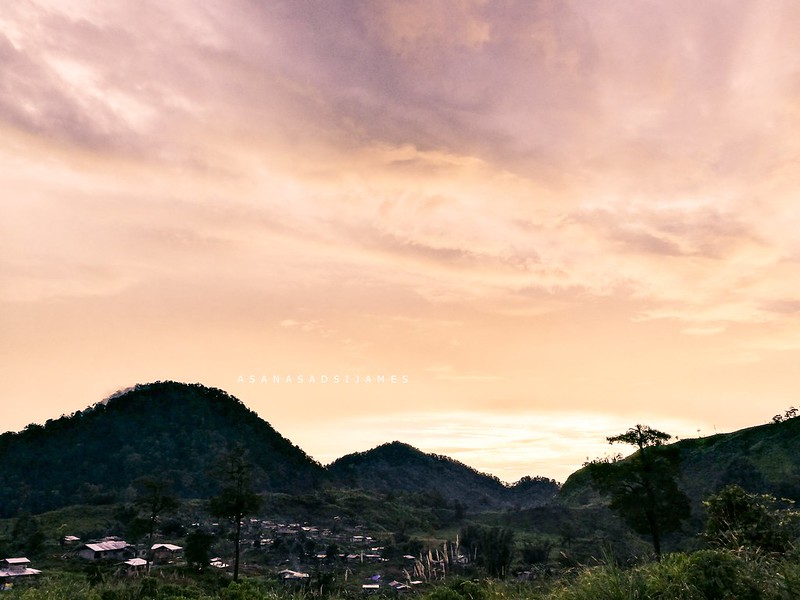 It’s already dusk when we visited the house of one of David’s friend. He’s one of the porters for tomorrow’s trek. Illuminated by a single solar-powered LED lamp, our porter’s weathered face appeared kindly, like that of a sympathetic villager, with lines and wrinkles drawn by his countless woodcrafts in years suggesting a calm but with fierce authority — both qualities that I would rely on during the dark and uncertain hours ahead. We sat on a wide bamboo bench as he was recounting joyfully his youthful days. We laughed. He also inspired us by his stories like David. He then added how much their village value their cultural heritage more than ever. They consider it as a useful leverage against the then poverty and famine. Lastly, he thanked David for everything he has done in contributing to the Tboli tribe of Kule. Such pure and honest words coming from an elder Tboli. 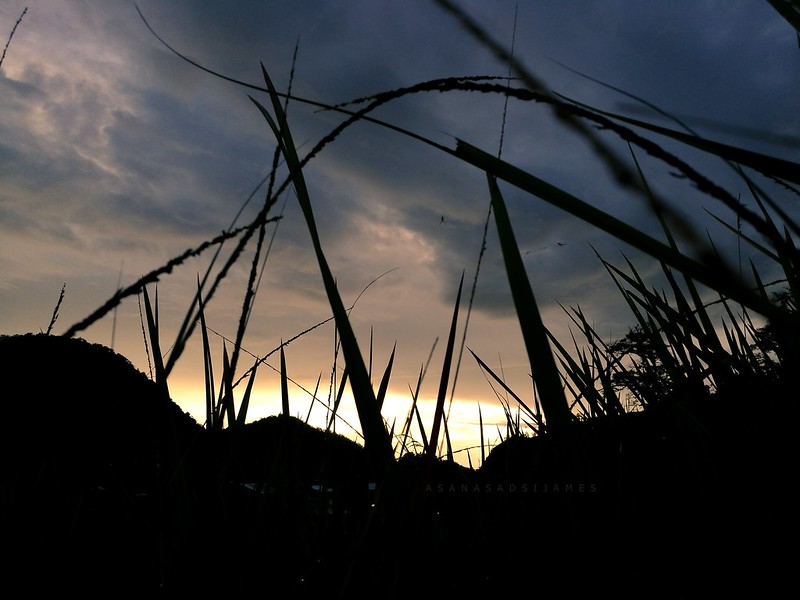 NOT STRANDED BUT AN IMMERSION

It became too late for us to visit another Tboli household, so we ate dinner — they cooked the chicken meat we brought in light broth studded with green papaya wedges, lemon grass, native basil, and some distinct flavors and spices — in their humble home. It was a heartfelt dinner before heading the sack. 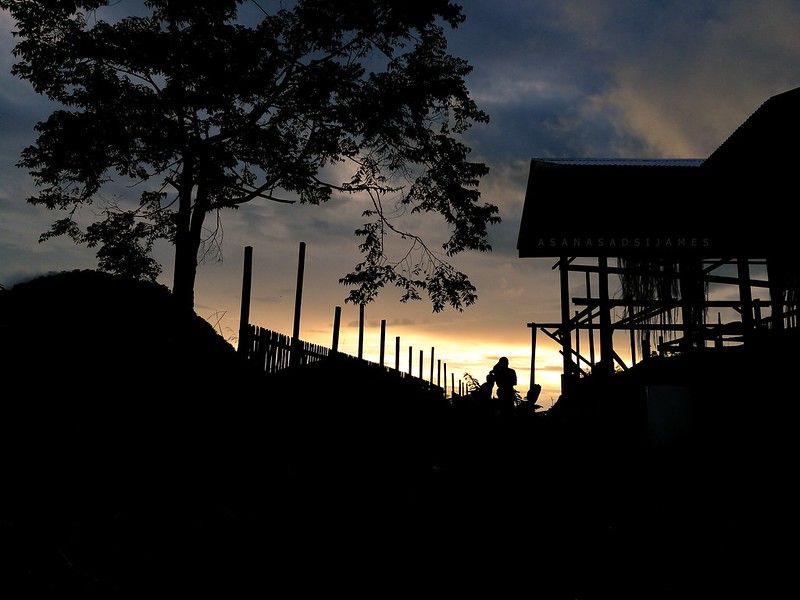 Every time I think about our Lake Holon adventure, all I could remember is how we got to interact with the tribespeople while we were in Kule and it’s a truly memorable thing to me including my friends. We came to the point when we wanted to stay a little longer in Kule to interact more with the villagers but sadly we couldn’t. The things that’ll only stay [ in us ] are things we learned from David and the Tboli tribe together with the joy it gives. The joy of life comes from the encounters with new experiences. We weren’t actually stranded. We just had an unplanned culture immersion.

I took the night off but in this freezing temperature, the open cold air of the hut animated with night sounds got me awake. I stood up and took a leak outside. Then, I sat on a long bamboo bench under a moonless sky, and slowly scanned the ocean of stars above for one of those twinkling ones meant for wishing upon. I finally found one, but my mind was blank. I didn’t know what to wish for. I was exactly where I wanted to be. And that is a very rare thing indeed.

BASIC ETIQUETTES WITHIN THE TRIBE

Certain behaviors are to be observed while you’re on the grounds of our local tribes. Although customs may vary from tribe to tribe, basic etiquettes remain the same.