If kuya habal-habal driver could glance my way, he would see the childish astonishment on my face. The provincial scenery took me down to memory lane of innocence and pure bliss. Breathing the fresh air, I couldn’t help but feel nostalgic. Hundreds of hectares of rice paddies with occasional bucolic clusters of coconut and mahogany trees through the winding road to Merloquet Falls simply reminds me of my hometown. If the scenery isn’t identical, then in some way or another they’re very similar that it kept tugging my heart.

Shortly after Tagbilat Falls, we took butt-numbing rides from Titay to Ipil then to Vitali. Almost two hours had passed before boarding off at Vitali, another 30-minute habal-habal ride swiveling on the rice fields and mountainous areas of Zamboanga City. 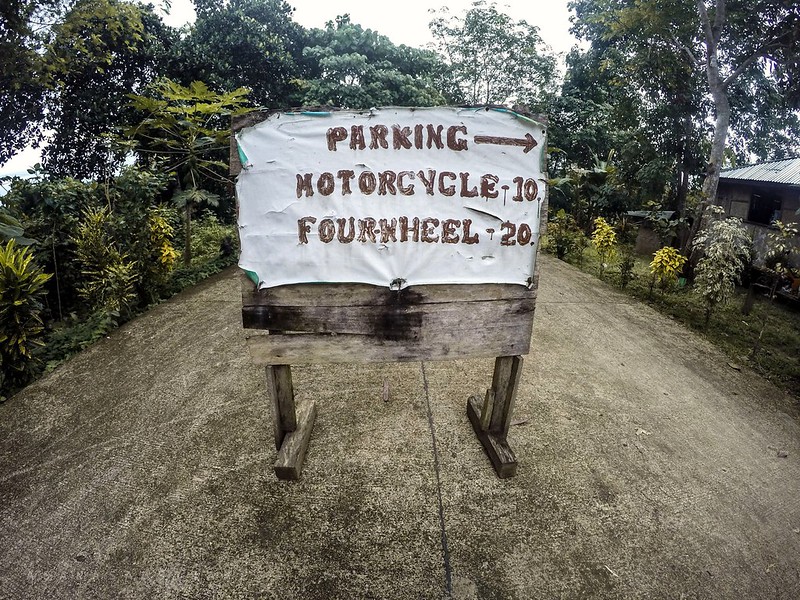 These concrete roads slithering its way through the mountains ended on the jumpoff area, a small sari-sari store. After logging our names, we faced yet another treacherous way to Merloquet falls, a concrete stairway. 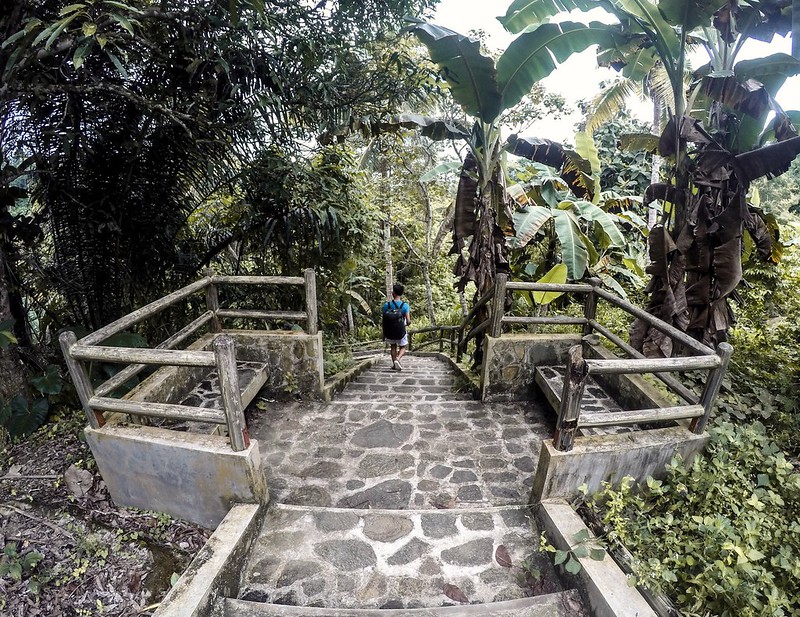 Concrete stairway paves the way to the falls. But everything around the vicinity entices our adventurous souls with its overgrown foliage, giving us a close encounter with nature on every step downhill. We lost count on how many steps we already have taken until counting doesn’t matter anymore when the site of flowing waters was within the lenses of our eyes. The waterfall slowly unravels at the end of the trail giving us a breathtaking welcome. The cascading streams we saw close before the Merloquet Falls were already amusing but it was only a shredded piece of the wonder of what lies ahead of the stream. 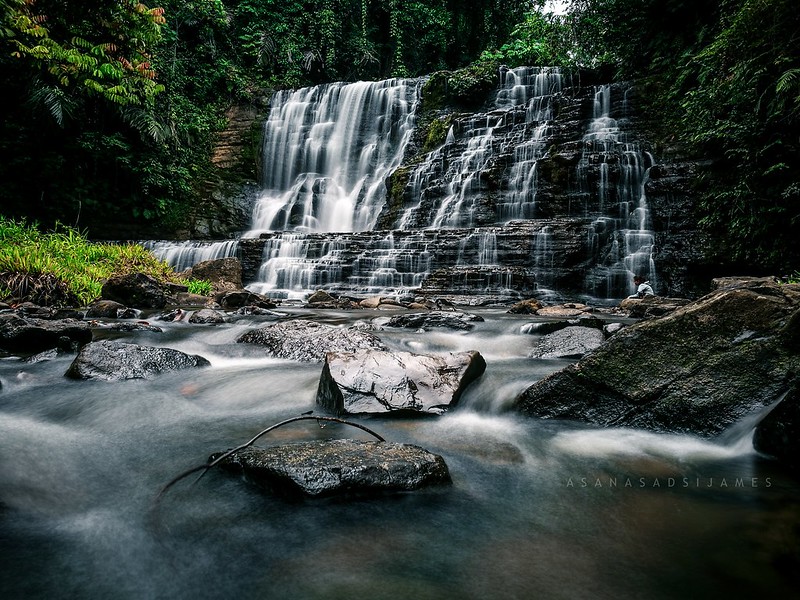 We encountered several locals who were enjoying their small lunch buffet of smoked fish and basketful of fruits beside the banks near the falls. Despite us looking foreign with our humungous bags and unusual outdoor clothing, the locals didn’t fail to show their generosity in offering a rationed food to us and even insisted after we refused their humble offer. This is what I love while traveling to underrated provinces. Despite their stark life, social statuses and appearances aren’t a hindrance for them to reach out to visitors and didn’t shy away to show the innate goodness of people from the province. After a small chitchat, we looked a spot to free our shoulders off our bags.

Merloquet Falls is a two-tiered waterfall with the upper level located several meters above the main cascade. The lower level, which is in plain sight after a treacherous downhill staircase, is where most of the fun happened and unarguably the most picturesque face of this waterfall. With the excitement welled up in our adventurous souls, our itchy feet made us close to this magical water curtain and took some decent shots. 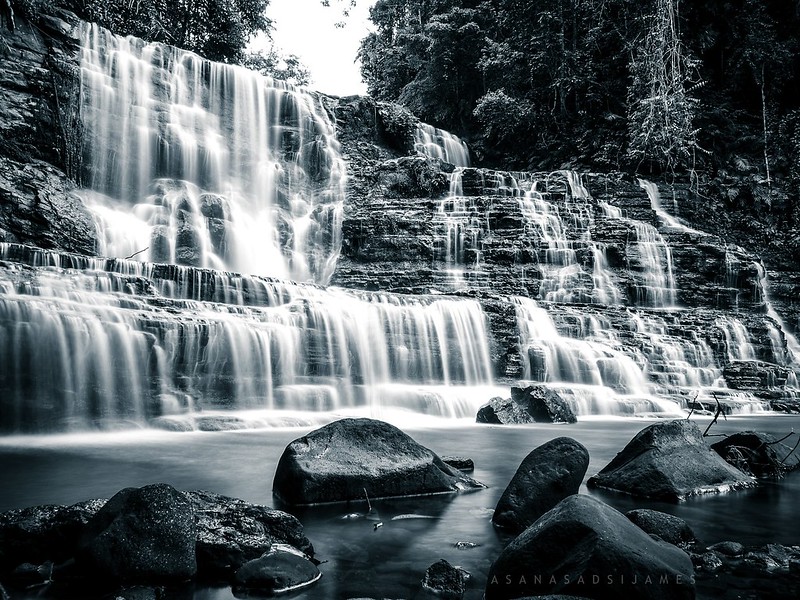 A stream poured over the edge of the cliff, like a fabric laid on the black walls, a white curtain in the midst of lush canopy trees and dark beautiful rock face feasted our eyes upon. Water cascading down and kissing the dark grey rocks beneath her, forming several irregular staircase-like motions of water. The falls rendered the sweetest music in the middle of the tranquil mountains. 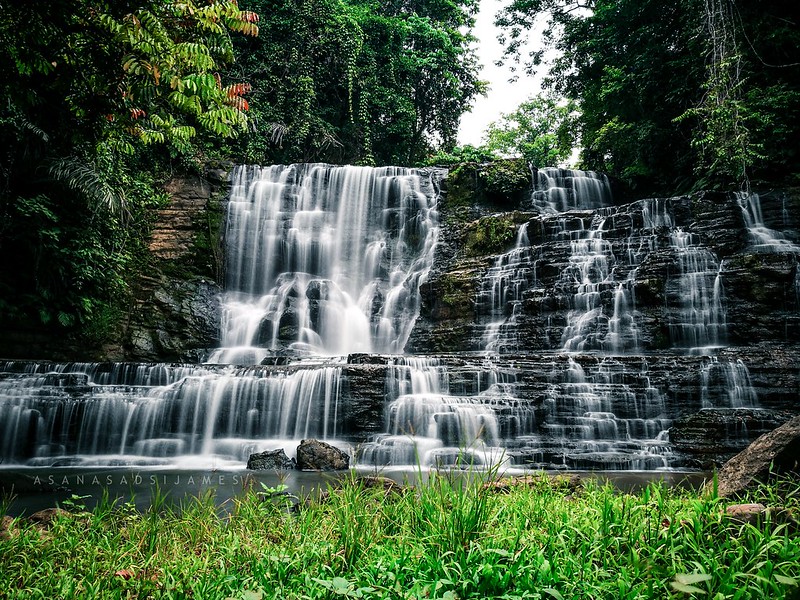 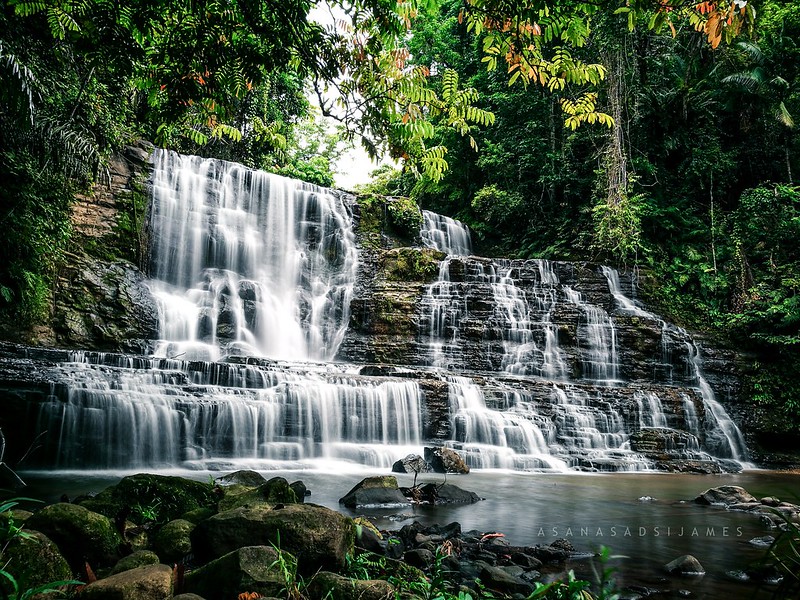 We freed our shoulders off our bags near the riverbank and came closer to the waterfalls. Washed up logs and thick bushes graced its facade adding more rawness on the place. Large rocks and boulders covered in moss donned its shallow basin which in my opinion is very aesthetic on the frames of our cameras. 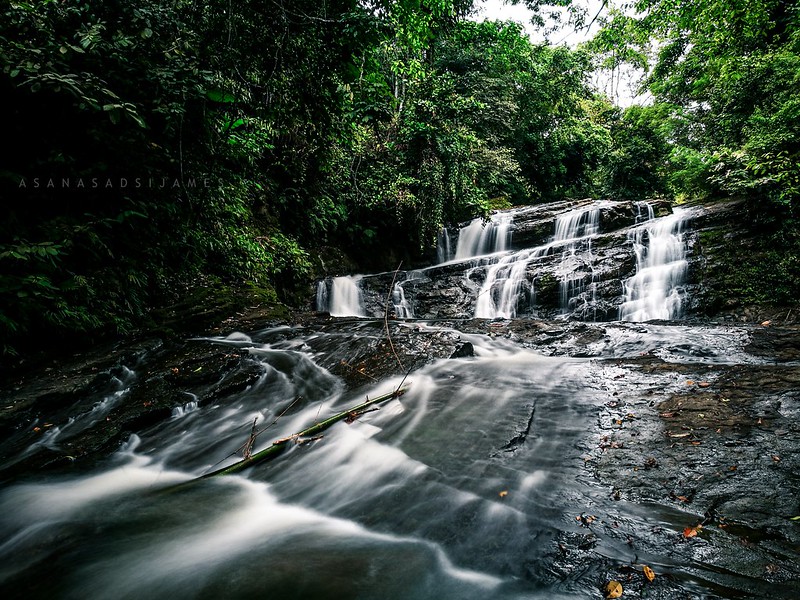 The upper tier is time-crafted by nature with a natural slide inclined on the side of the waterfall up to its deep moss-colored catch basin. Sure does it’ll entice the hearts of those adventurous souls as it pummels the wanderlust of those who love cliff jumping and sliding a natural pool. 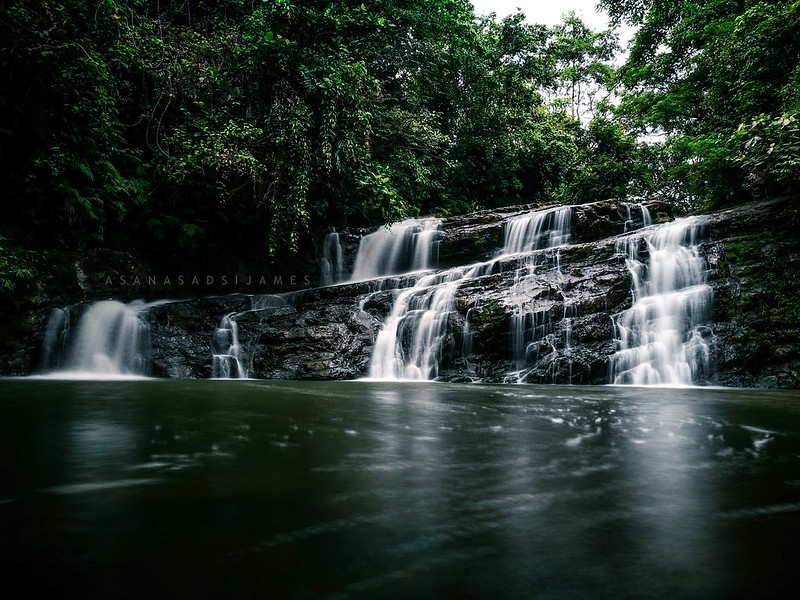 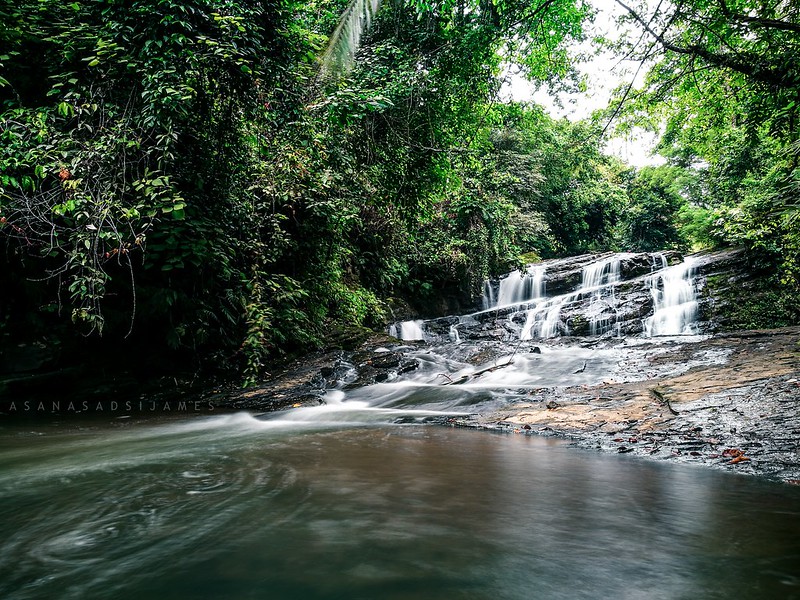 Reaching the upper level was a bit of a challenge for it requires a great balance on a steep trail on the side of the lower level but safety ropes and makeshift woods are installed as railings. Moments later, we trailed back to the lower level to have our precious shower taken.

Subservient that we were in the presence of this waterfalls, its magnetizing attraction took a full turn before us. Getting here was a great challenge and missing its waters is like spending your money on a ticket you didn’t take. So, off we went with our board shorts and sweaty body. 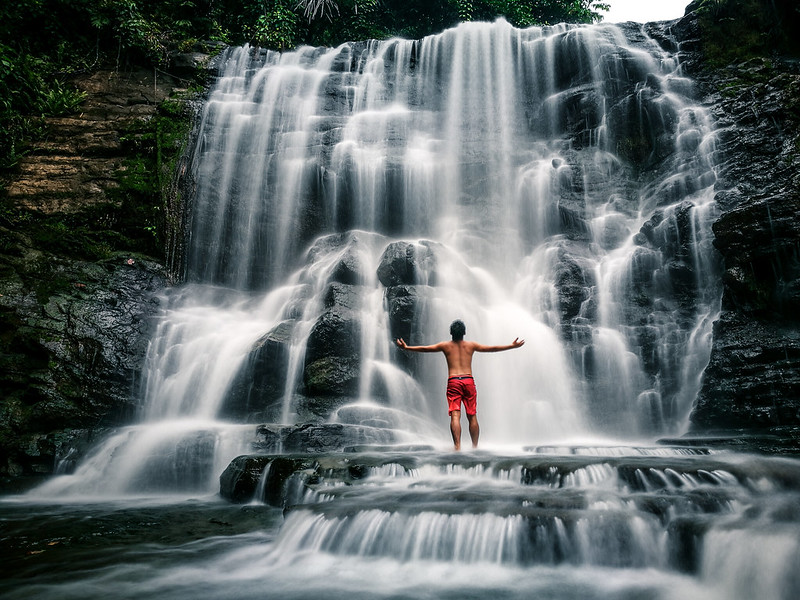 The side of the waterfall is pretty slippery and its upstage is carpeted with layers of moss repealing the friction under our feet. As the moss was brushing the soles of our feet, we should adopt what nature has to offer. The bliss that this magical water curtain brought and the warm welcome of the locals were slowly seeping into our memories. Truly, in the house of other people, the hospitality and their elegant furniture will surely be engraved in the minds of the visitors. Merloquet Falls has the warmest locals it deserved to be taken care of. 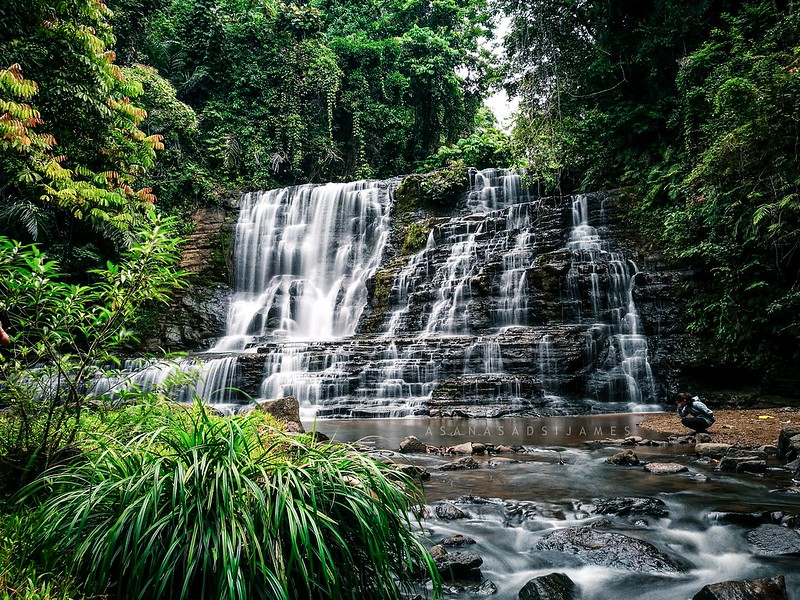 Welcoming people is just one of many factors why travelers kept visiting even on underrated provinces. It is also why Merloquet Falls is one of the frequently visited waterfalls here in Mindanao. It lives to its name as the magical water curtain of the island. It’s a paradise for those who seek nature’s humbling caress. It’s as if heaven pinned its grandest white curtain on the walls of the mountains of Zamboanga City.

HOW TO GET TO MERLOQUET FALLS 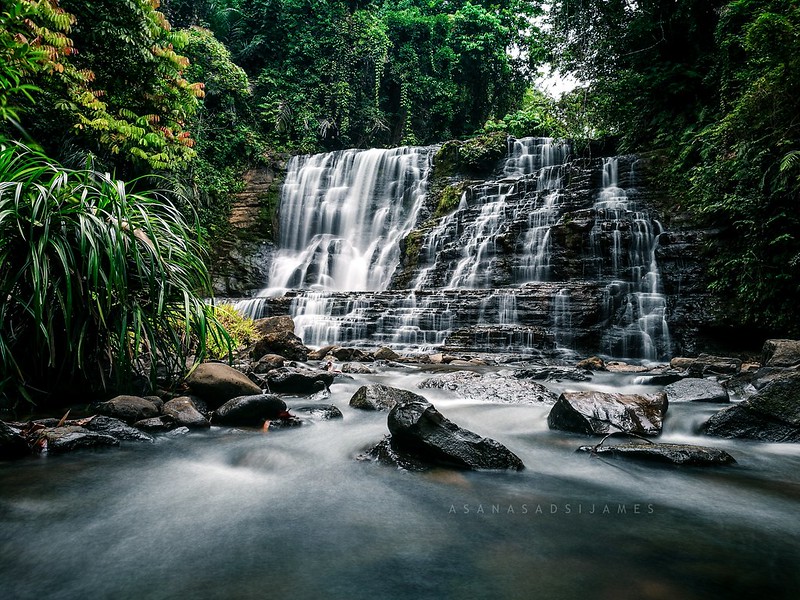 Being one of the most sought-after waterfalls in Mindanao, Merloquet Falls continues to wave its name on the internet, flocking tourist from nearby provinces and other parts of the country. 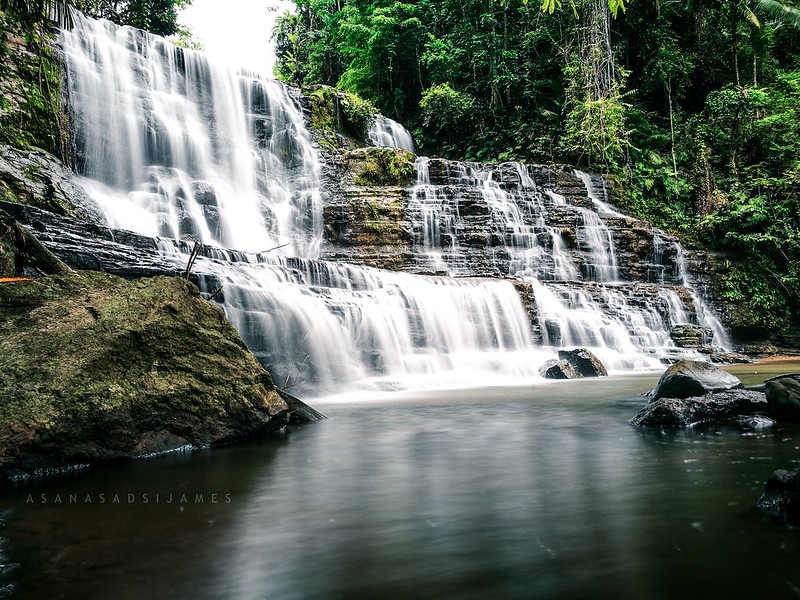