Among the most fascinating sights throughout Iloilo are the province’s many beautiful and historic churches. Over hundreds of years of colonization, western colonizers, fueled by deep devotion, built churches and cathedrals as commemorative structures of their faith and to influence Filipino settlers to their religion. These have been a place of worship, which people have both loved and feared throughout the ages. And yet, here they still stand today, having witnessed and sometimes even been the epicenter of some of the province’s most important, tragic and revolutionary moments in the past, all of which have contributed to the lives of Filipinos as we know it.

The churches and cathedrals are an important part of Iloilo’s history and architectural heritage. Today, not only are they remnants and survivors of the past, but they are also exquisite and marvelous works of art and astonishing craftsmanship of combined efforts of people in religion labored over many years, capable of making us feel emotions and wonder at their beauty, transporting us back through time. They attract many tourists into the province every year. Regardless of your religious affiliations, there’s something quite grand and majestic about these iconic structures, and a trip inside and around the exterior is almost always an enthralling experience. Whether or not you’re religious, your next trip to Iloilo should include a few stops at the province’s most beautiful and historic churches. This list includes the top churches in Iloilo and what makes each unique. 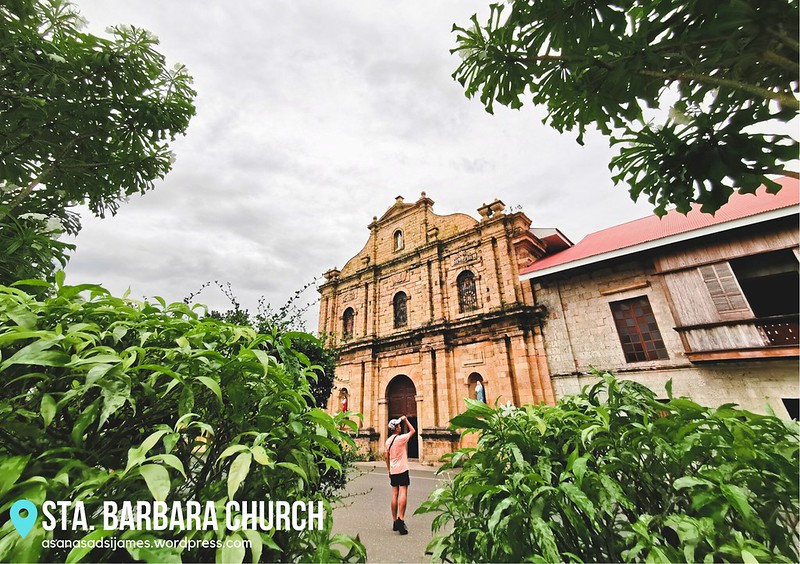 Built in 1865, Santa Barbara Catholic Church of Santa Barbara, Iloilo is of Baroque Renaissance architecture and the only church in Iloilo with the convent still attached to the main structure which is reminiscent of Hispanic-Moorish architecture. Santa Barbara Church imposes simplicity and beauty among the historic churches of Iloilo. Its yellow sandstone facade was emplaced with twinned pillars and finials in neoclassic design. 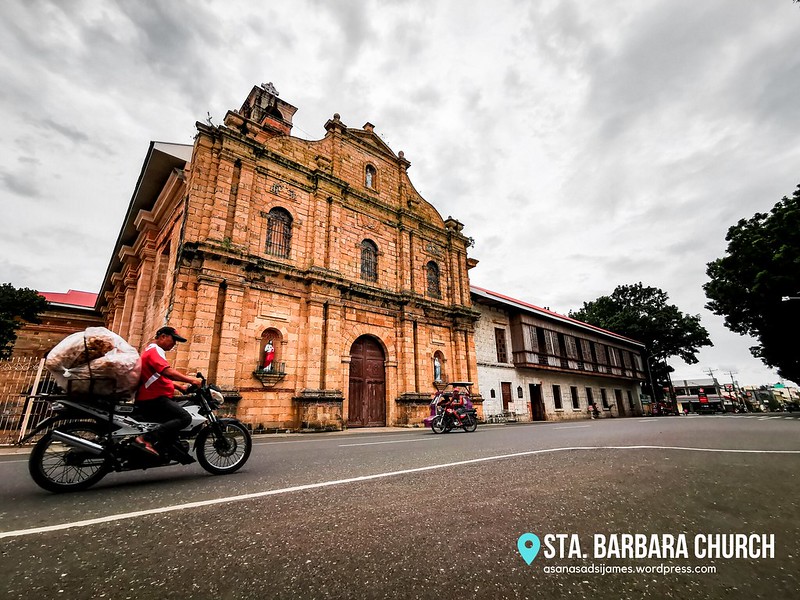 Framed on its left is Santa Barbara Church’s convent. Passing through the door of the convent, its eye-catching red-bricked arches and a touch of Spanish elements on the convent’s designs create a picture of Hispanic living. 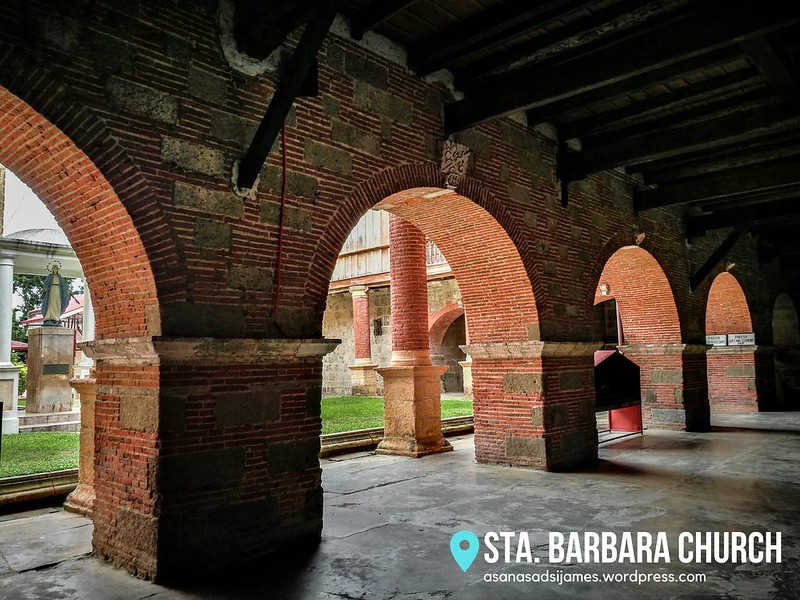 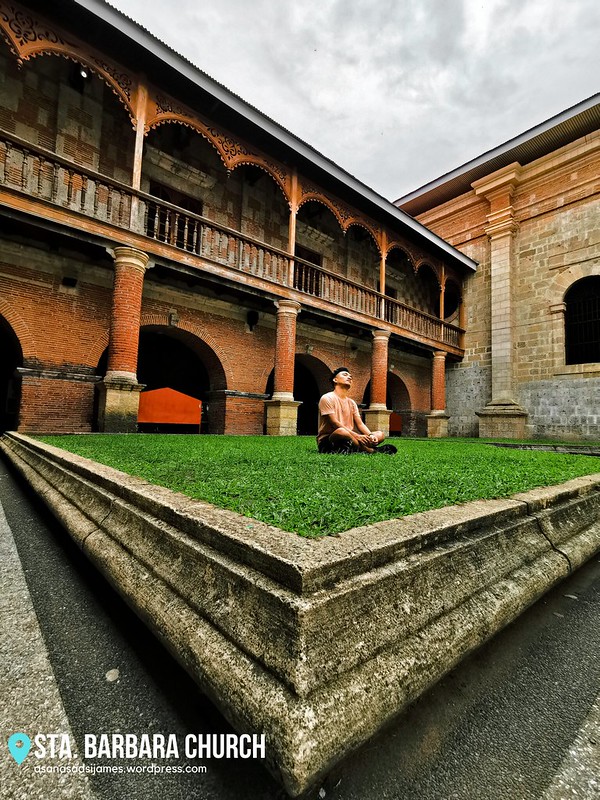 Santa Barbara Church humbly carved a big part in the Philippines’ history as it plays an important role in liberating Iloilo against Spanish colonizers during the late 1800s — the first cry of revolution outside of Luzon. The church served as the general headquarters and infirmary of the brave Ilonggos during those days. Armed with bolos and knives, Ilonggos cried for freedom and struggled the odds to free Iloilo from the grasp of the Spaniards. Today, Santa Barbara Church and its convent are declared as National Heritage Sites. 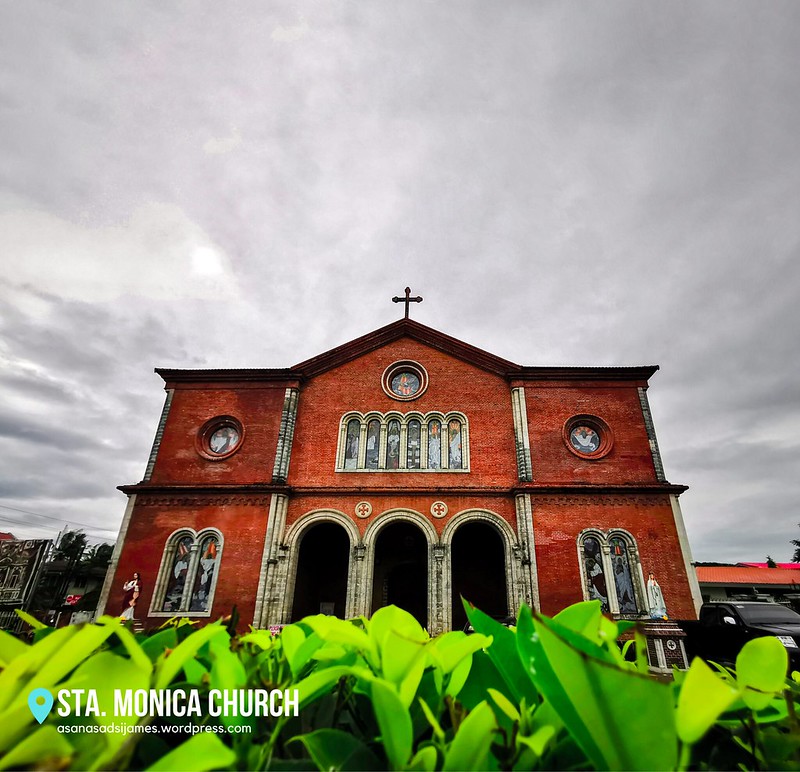 A lesser-known church to most tourists is Sta. Monica Church of Pavia, Iloilo. Built in the late 1800s by Augustinians friars, it is the only red-stoned church in the whole island of Panay which was inspired by an 11th-century basilica located halfway around the world in Pavia, Italy. 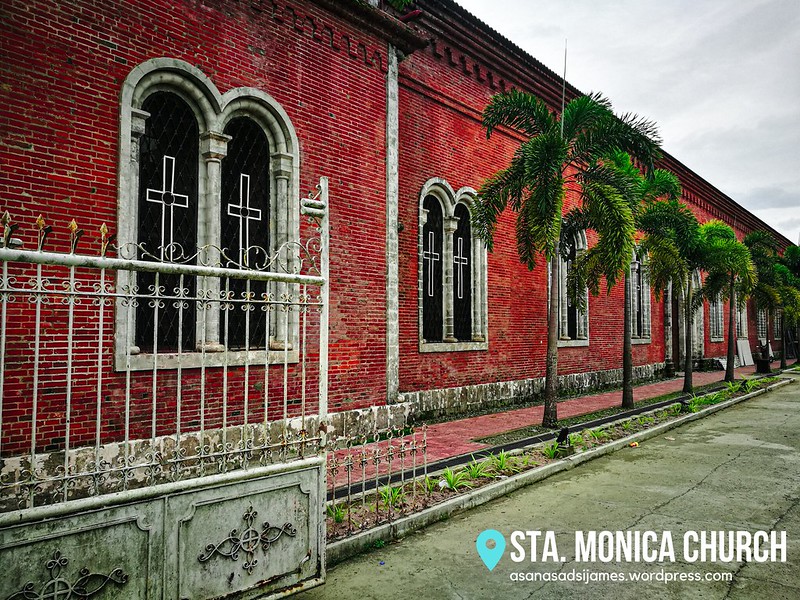 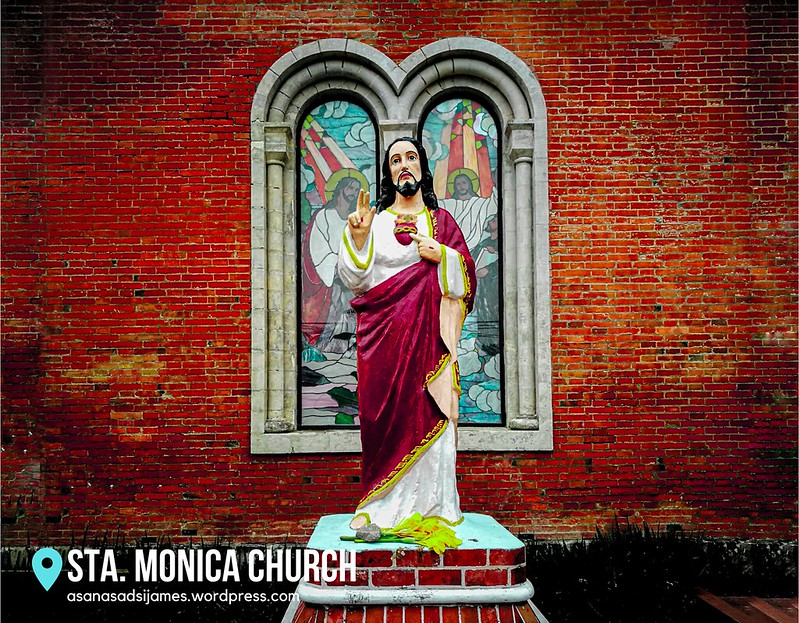 Sta. Monica Church is inspired by Romanesque-Byzantine architecture with simplicity and cleanliness dominates the entire design. Its symmetrical facade is decorated with arched entrances and windows, greek crosses, and circular windows. All windows are decorated with an intricate design of stained glasses depicting the phases of Christ’s life and suffering on earth. The barrel-shaped apse at the back of the church completes its overall Romanesque design. 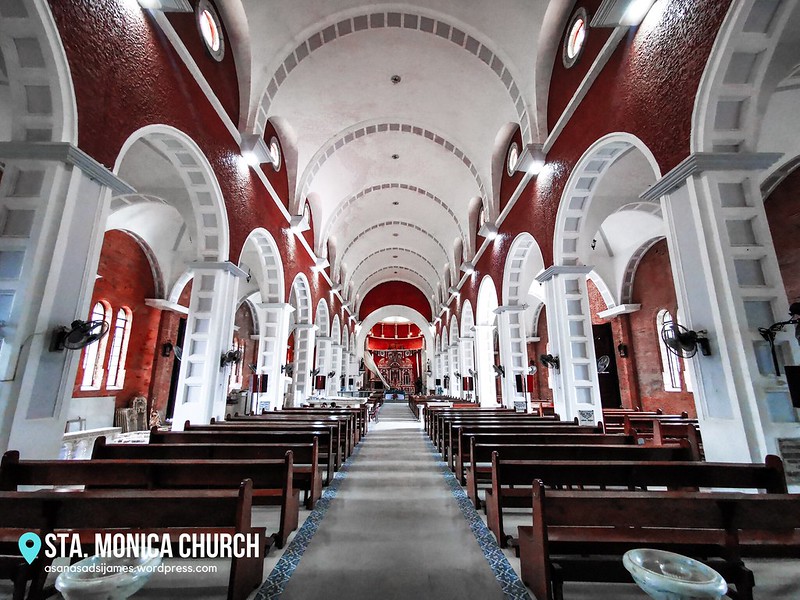 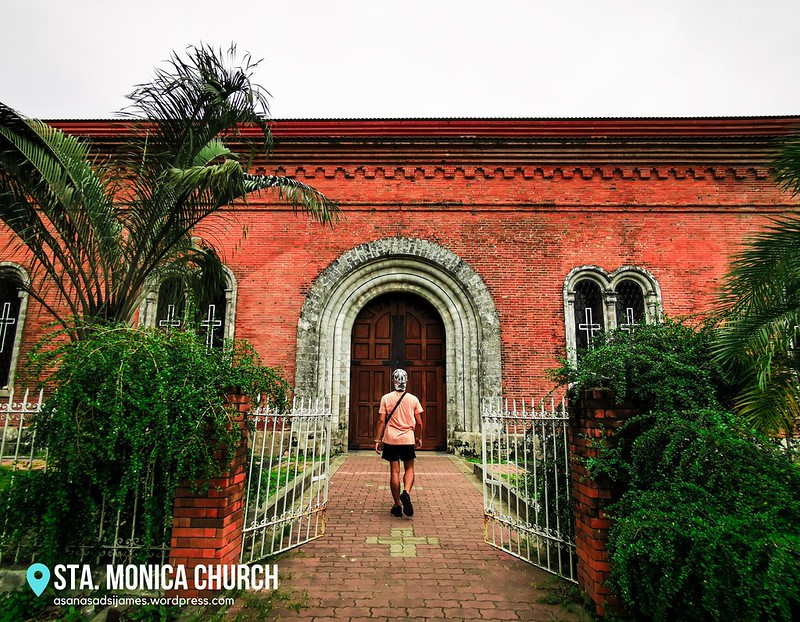 Before its restoration today, when World War II broke, Sta. Monica Church served as a fortress in Pavia against Japanese soldiers. Like any other churches in Iloilo during the revolution, it also served as a symbol of refuge and strength of all Ilonggos. 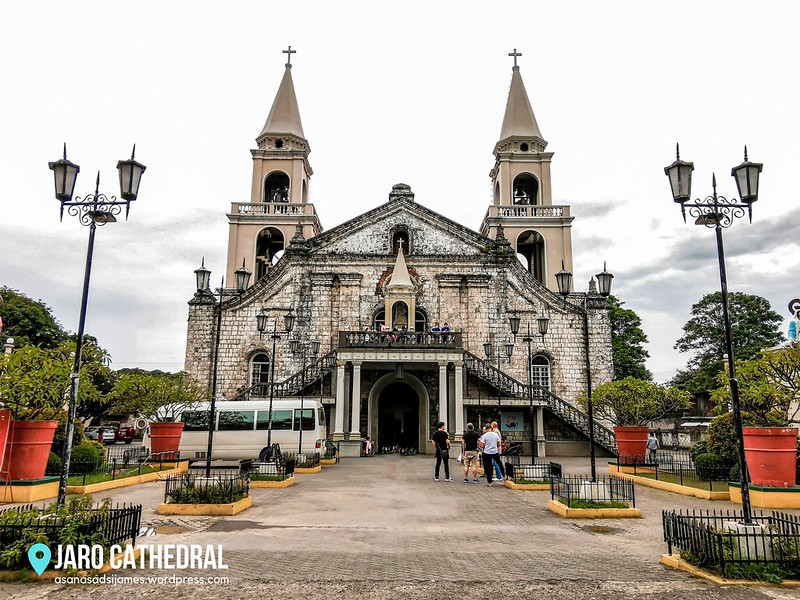 Most frequently visited by tourists in Iloilo province is Jaro Cathedral that is nestled within the city of Iloilo. Also known as Nuestra Señora de la Candelaria (National Shrine of Our Lady of the Candles) and Church of St. Elizabeth of Hungary, it is the only cathedral in the island of Panay and the second national shrine of the Visayas next to the Basilica del Sto. Nino in Cebu. It goes by many names as this Romanesque Revival Style cathedral is also called as the ‘male church’ because of the male saints that stand on the two rows of pilasters inside the cathedral. 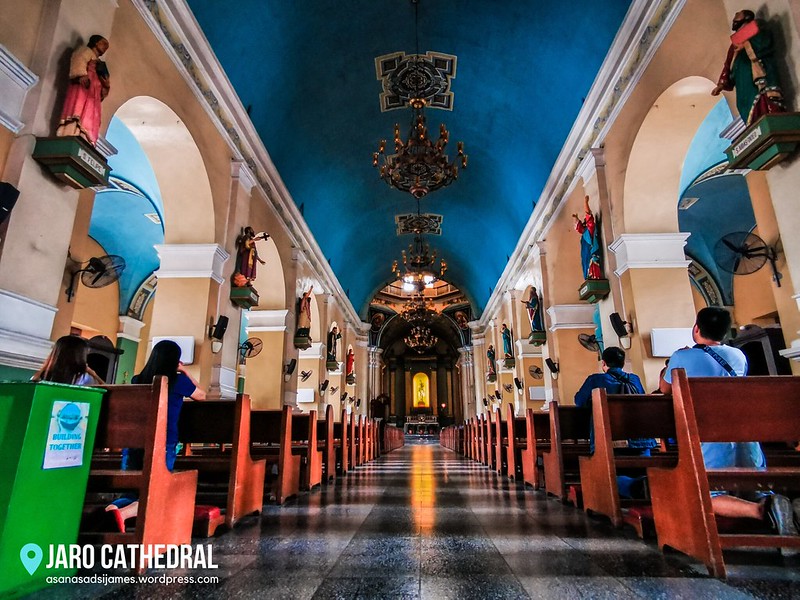 One female, however, reigns over the cathedral — the Lady of the Candles. A 400-year-old image of Mother and Child can be found at the façade, over the entrance of the church and is believed to be miraculous. It was canonically crowned by the late Saint John Paul II during his visit in Iloilo City on February 21, 1981. 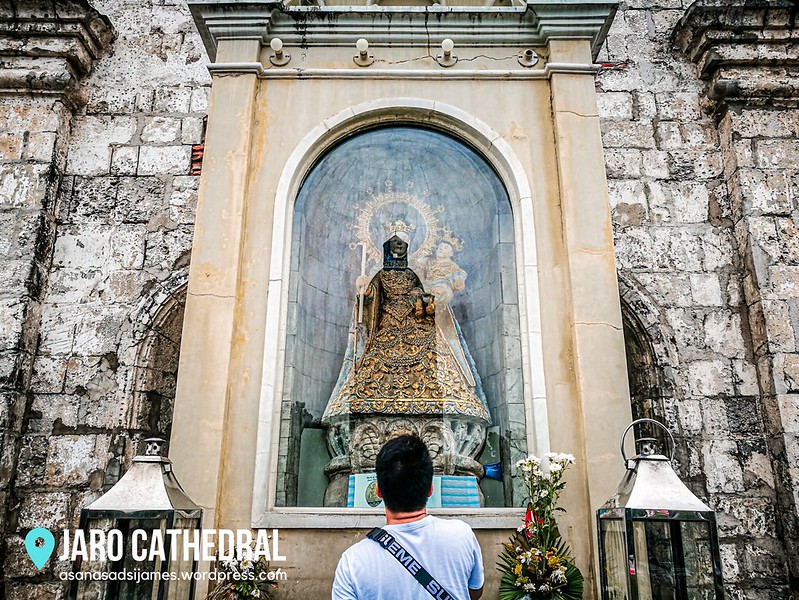 There are many interesting facts about Jaro Cathedral. One of which is its design and architecture that is believed to be a Romanesque Revival architecture. This architecture stays away from the usual semi-circular arches usually used in churches. 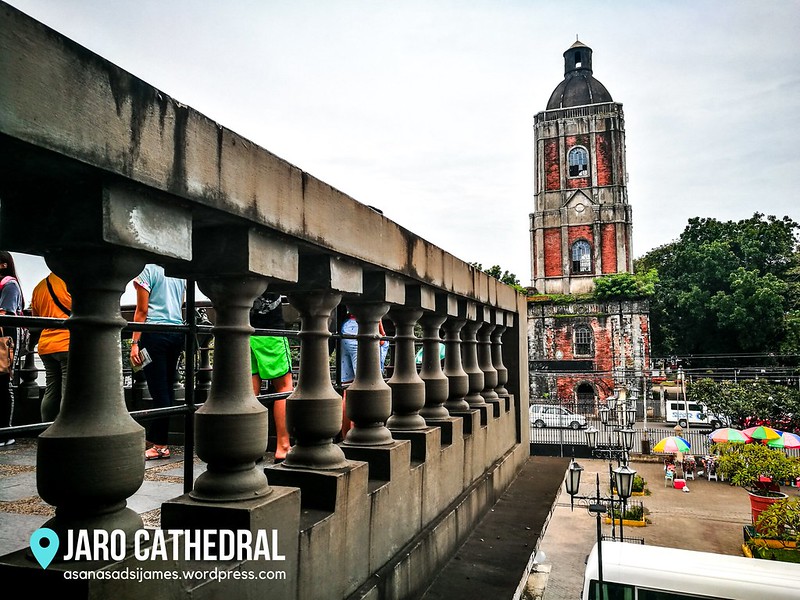 While most of the churches and cathedrals in the Philippines has its belfry framed next to the fundamental structure, Jaro Cathedral deviates its belfry onto the opposite side of the street which is believed to be a watchtower against intruders during the colonial era. 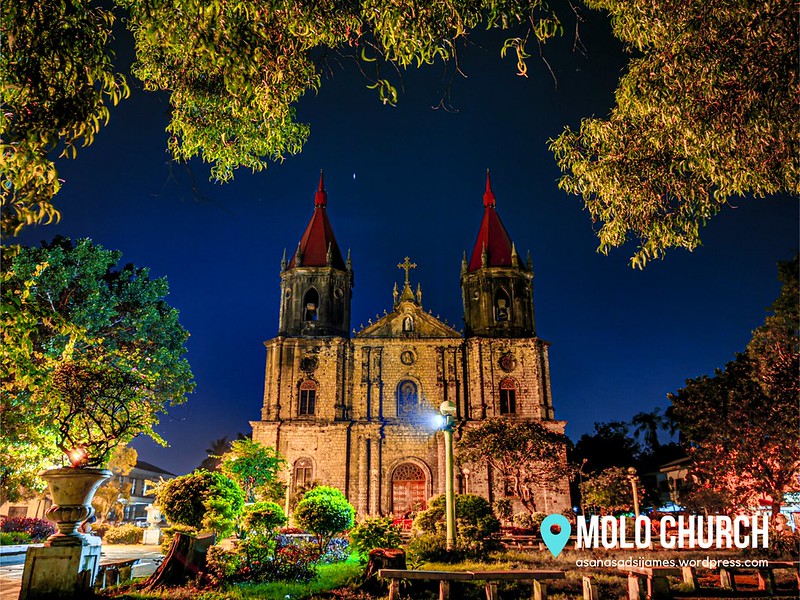 Not only beautiful from street level, St. Anne Parish or famously known as Molo Church is similarly stunning. A church like none other can be found in the city of Iloilo. Built in 1831, this Neo-Gothic or Gothic-Rennaisance architecture is the only one found in the entire Philippines outside of Metro Manila. Molo Church, with its belltowers crowned by dramatic red spires, resembles of that of a fairy tale castle right out from the European folktales. 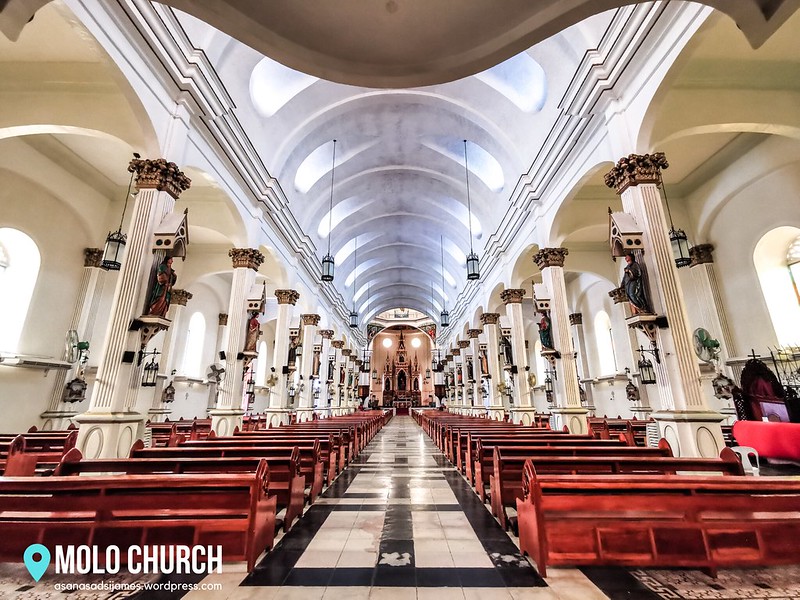 It is also called as a ‘female church’ by many as it is the only church in the Philippines with all-female saints embellished inside on the church’s 16 aisle pilasters. Their main patron is St. Anne who holds the centerpiece of the church in the main altar, thus its namesake. 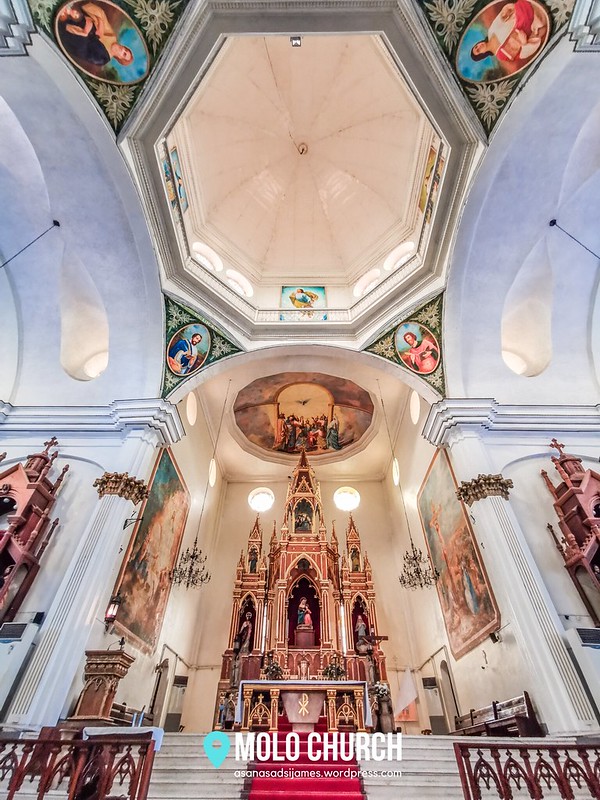 During World War II, Molo Church served as the refuge for Ilonngos against the Japanese military. 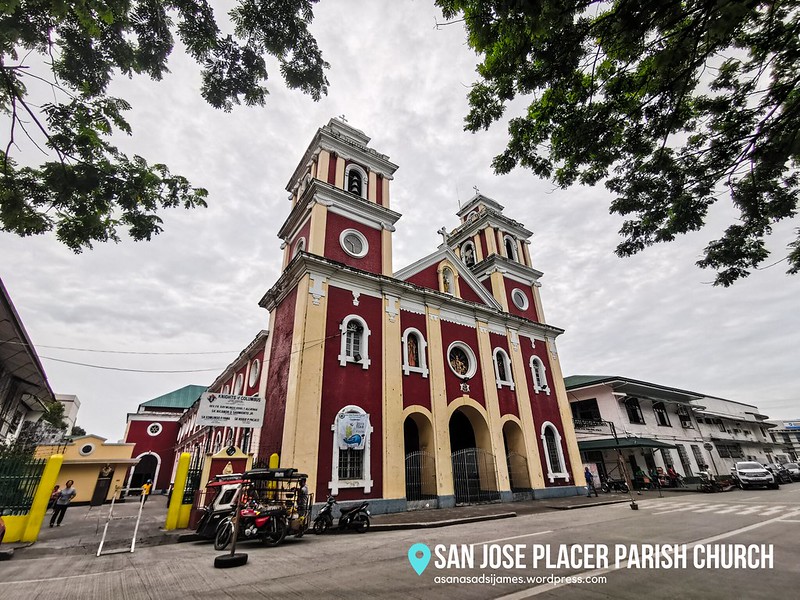 Another beautiful Renaissance-inspired church can be found in the beloved Plaza Libertad within Iloilo City. San Jose Placer Parish Church exhibits such simple design yet very much ornated with Hellenic influence, with Corinthian pilasters supporting the long narrow central hall of this cruciform church that rises higher than the aisles flanking it to form a clerestory. Its vibrant maroon color instantly attracts the eyes of the tourists by the ports coming from nearby islands of Negros and Guimaras. San Jose Placer Parish Church holds many treasures for Ilonggos. A precious treasure of the church is an image of the Nuestra Senora del Rosario (Our Lady of the Holy Rosary) discovered by Diego Quinones. Aside from that, an image of great importance is a replica of the original Sto Nino of Cebu which was brought to the church as a gift in 1968, thus the birthplace of a very well-known festival in the Philippines — Dinagyang Festival. 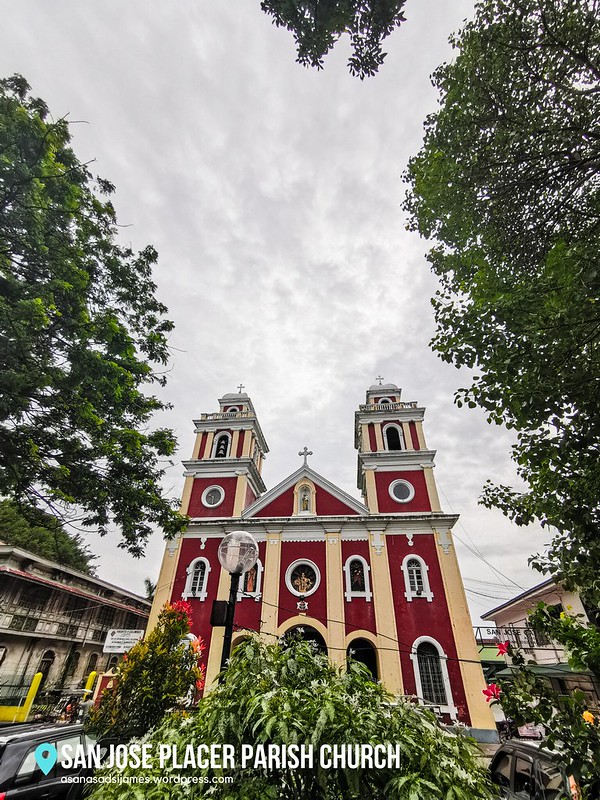 The current site of San Jose Place Parish Church is believed to be the place of the first church constructed in Iloilo City around 1607. Situated in the historic Plaza Libertad, San Jose Placer Parish Church is a grand witness where the flag of the First Philippine Republic was raised in triumph in the plaza after Spain surrendered Iloilo to the Ilonggo revolutionaries. 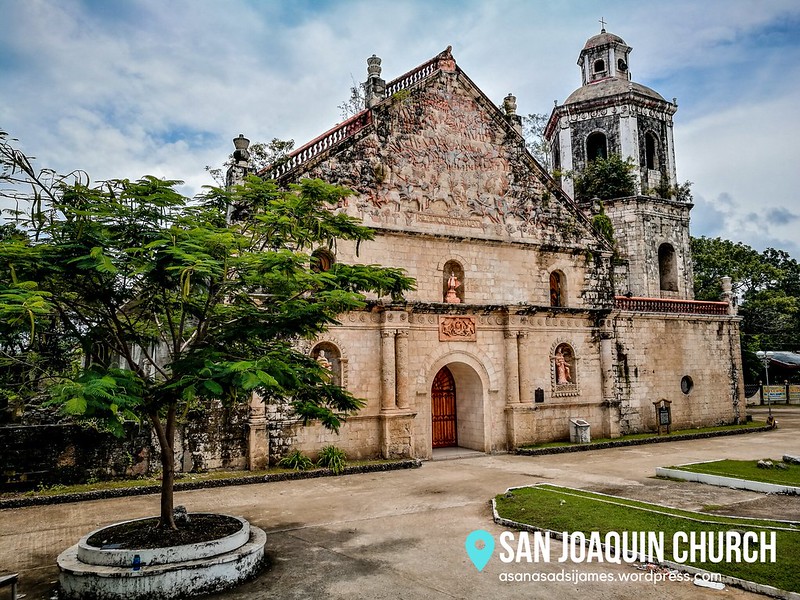 A church that narrates victory of war from invaders through an artwork, San Joaquin Church in San Joaquin, Iloilo is the only church in the Philippines that celebrates war and carved its story on its stone bas relief on the church’s facade. A closer look on the bas relief reveals a mesmerizing and many intricate details of sculptures of the agony and pain of the wounded soldiers during the Spanish army and Moro invader in the Battle of Tetuan. This dramatic masterpiece is called Rendicion d’ Tetuan (The Surrender of Tetuan), an honorary symbol of the triumph of good over evil that boosts the morale of San Joaquinhon. 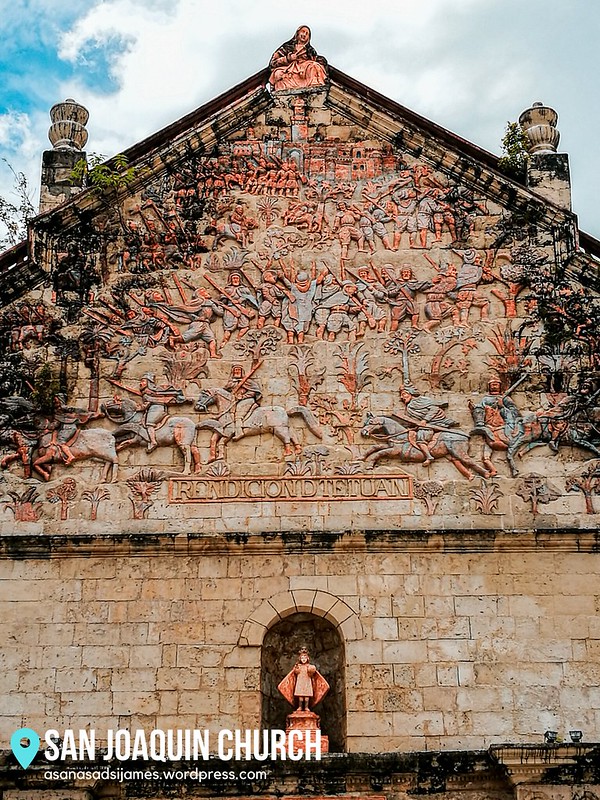 On top of the pediment, rather of a cross, a carving of Nuestra Señora de Angustias was placed. Other statues marked on the facade of the church at each side of the main door are Saint Peter Regaldo and Saint Francis of Assisi. Also, a statue of Jesus Christ stands at the front of San Joaquin Church that welcomes parishioners and visitors. 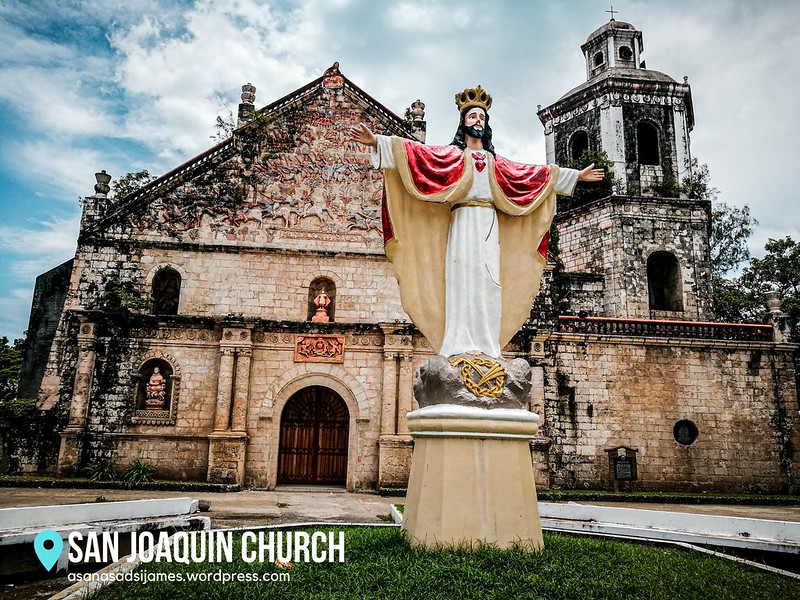 Built in the late 1800s, San Joaquin Church is made of limestones quarried from the mountains of Igbaras and abundant resources of coral stone taken from the shorelines of San Joaquin. 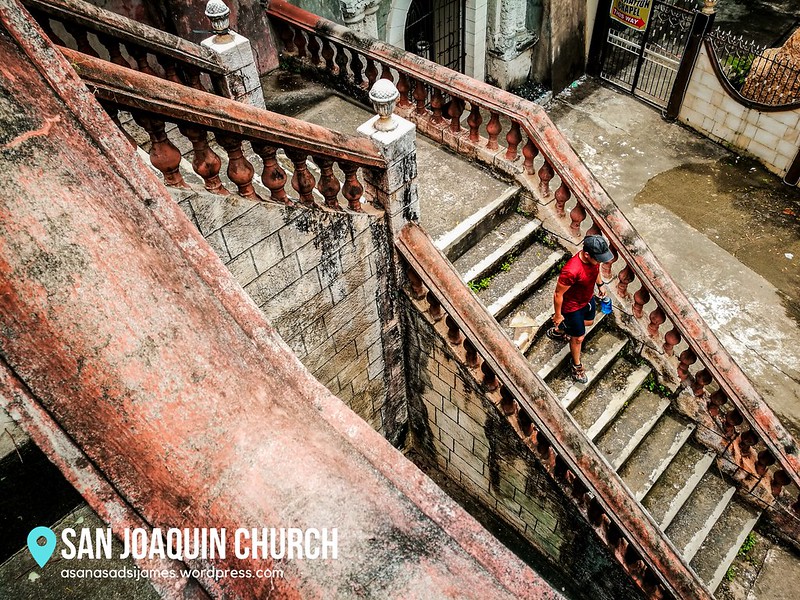 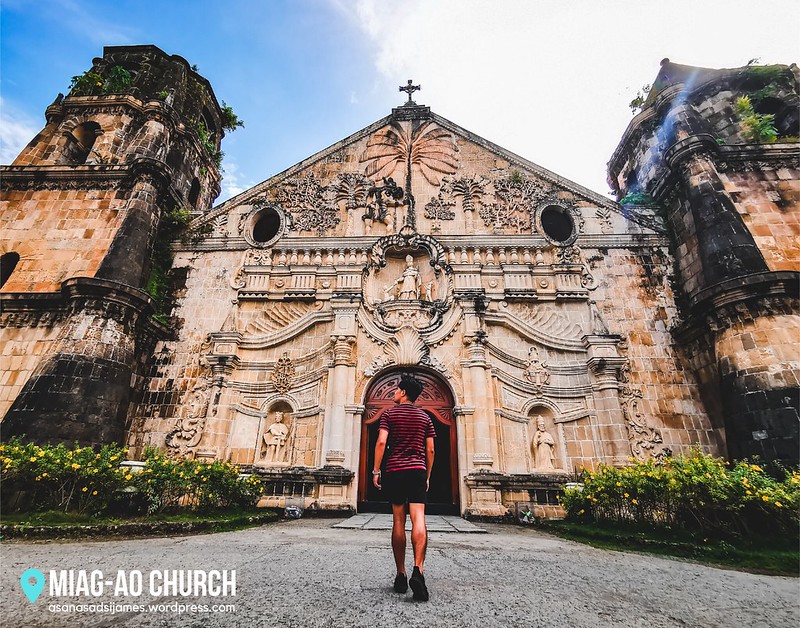 The Church of Saint Thomas of Villanova, commonly known as the Miag-ao Church, is one of Iloilo’s most recognizable landmarks. It is best known for its stunning architecture and inclusion in UNESCO’s list of heritage sites under “Baroque Churches of the Philippines.” But, what makes the church more unique and widely known to Ilonggos? It’s the intricately designed facade of the church. 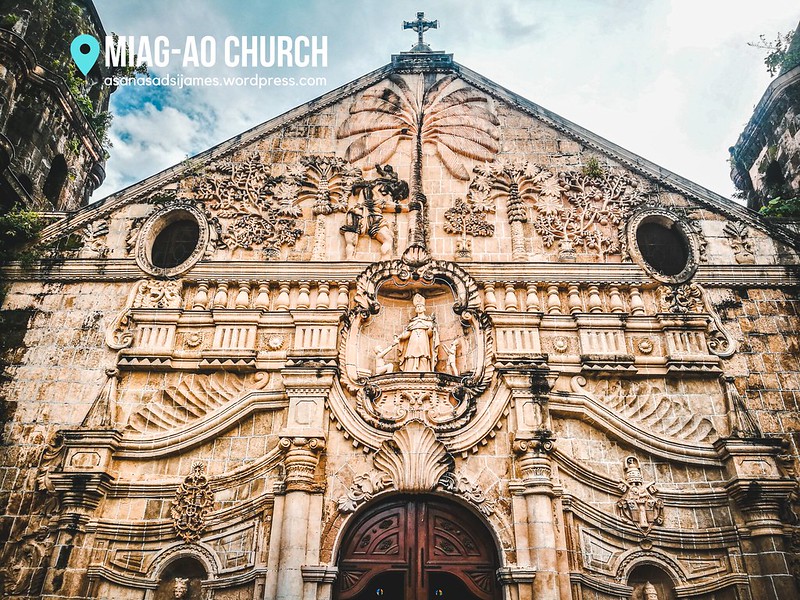 Completed in 1797, the artistic sculptural relief carved on the Miag-ao Church’s facade depicts St. Christopher bearing the Child Jesus amidst coconut, papaya and guava shrubs along with other flora. Below it is the stone image of St. Thomas of Villanueva, patron saint of Miag-ao, as a centerpiece. 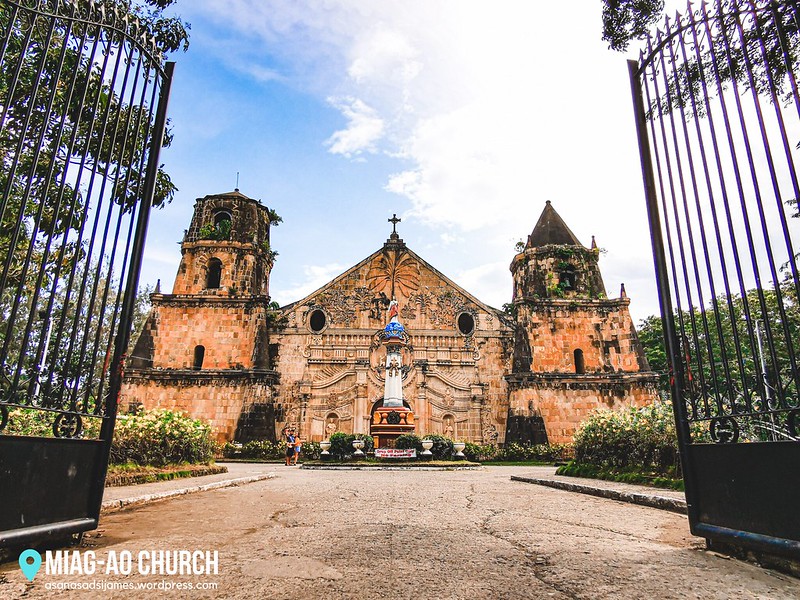 Mounted on each side are its colossal belltowers with a different architectural design but with equal grandeur that complements the church. Despite being intricately designed from the outside, the interior design of Miag-ao Church remains neat and simple except for its rather lavish and ornate altar. It was not the same as other churches but it was elegant in its perfect way. 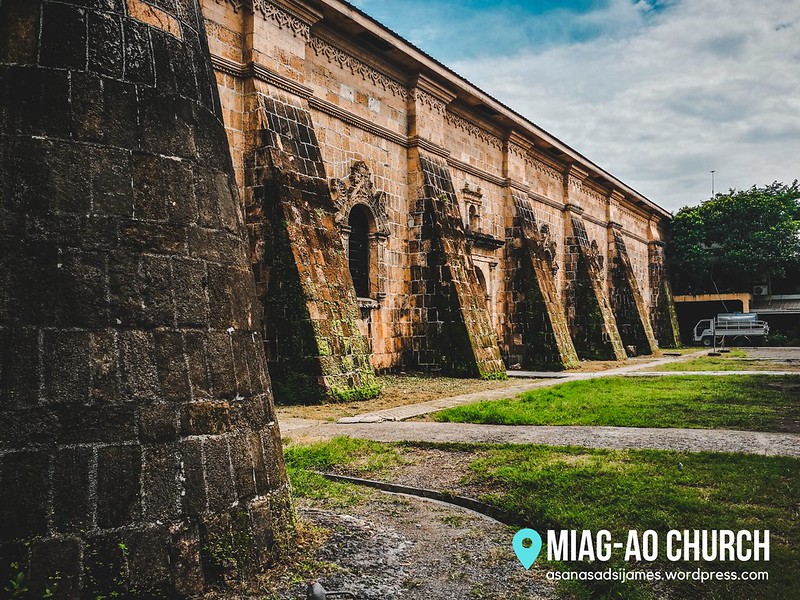 Situated at a high elevation of the town, Miag-ao Church’s belltowers served as watchtowers to defend the town against Moro invasion. With its thick walls, Miag-ao Church also served as the protection of Ilonggos during the past revolutions.