For us Filipinos, this small island of Guimaras is almost synonymous with our national fruit, mango. Thriving over the fertile soil of the island, there are over 50,000 mangoes trees that produce the sweetest mangoes in the whole world in Guimaras Island. 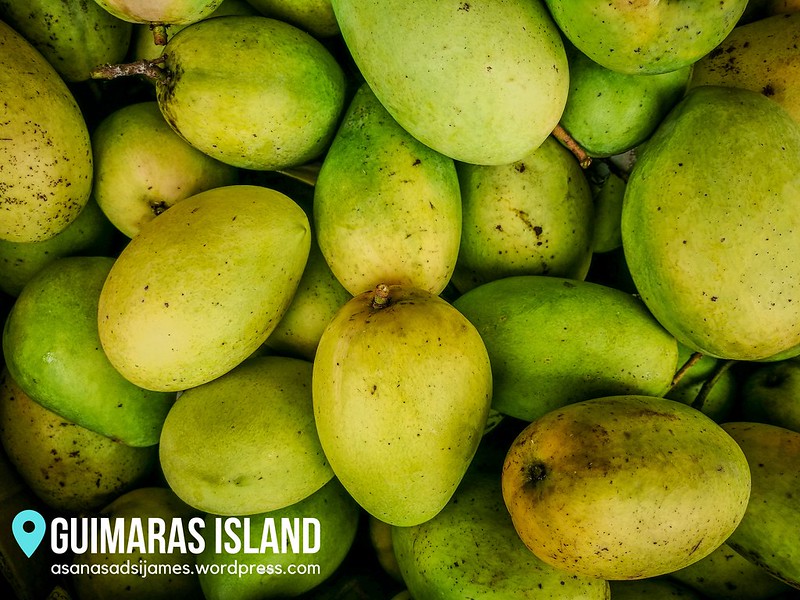 This sweet island of Guimaras doesn’t only boasts its world-famous mangoes, but also has their pride in their natural and man-made attractions for adventurers and tourists. Being a developing province that is naturally blessed, no wonder that Guimaras Island attracts many visitors yearly. It’s a sweet escape from the nearby busy province of Iloilo. It’s quiet and offers more of a provincial ambiance while exploring the whole Guimaras Island.

This is a long-overdue bucket list that I want to tick off and of course, to taste the sweetest mango in the whole world. We availed the Guimaras tricycle land tour for a day. It’s the quickest way to explore Guimaras Island and to visit their attractions. So, here some of the top attractions here in Guimaras Island. 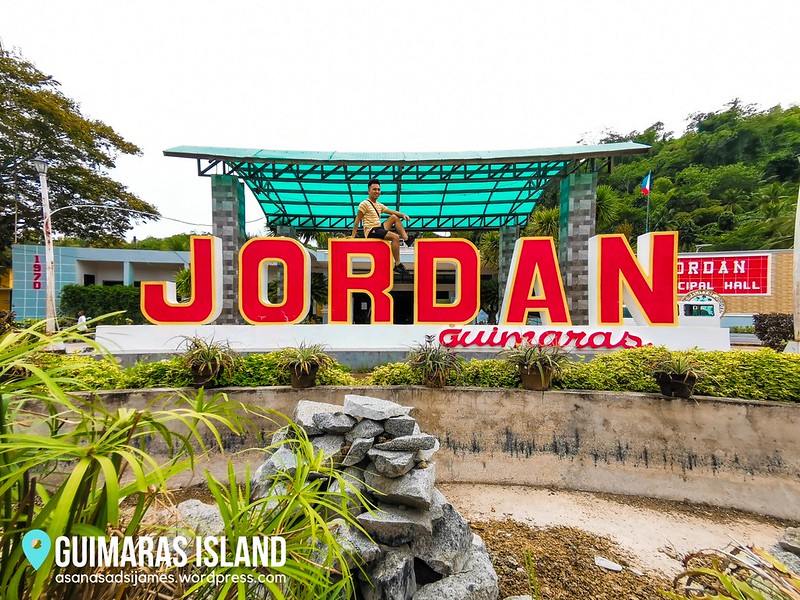 In less than a 5-minute drive from the Jordan Wharf, this is the first stop of our tricycle tour. It is right in front of the Jordan Municipal Hall along the Guimaras Circumferential Road. 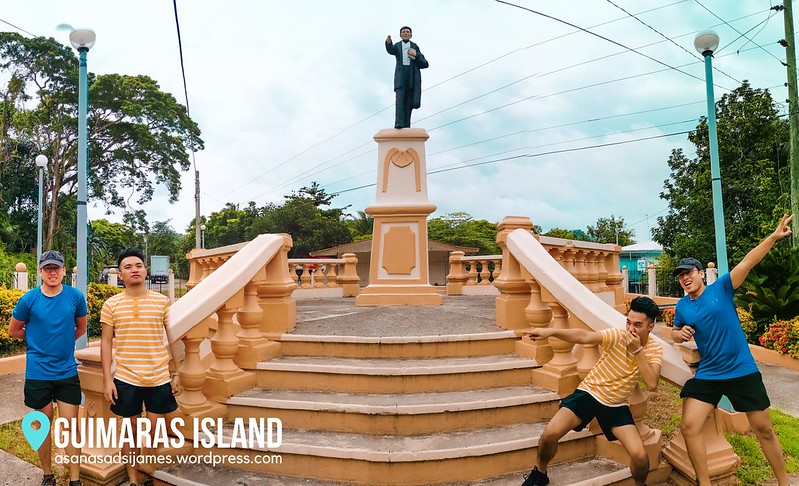 Once hailed as the “Smallest Plaza in the World” by the Guinness Book of World Records, it’s a minute drive from Jordan Signage along the Guimaras Circumferential Road. Though ousted by another smaller plaza from another country, it remains as the Smallest Plaza in the Philippines. The plaza has a monument of our national hero, Jose Rizal, whose statue stands at the center. 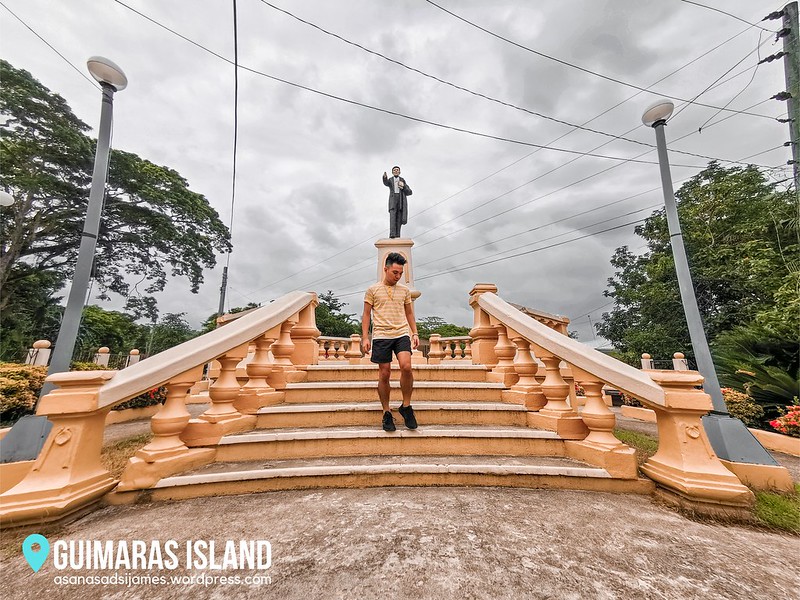 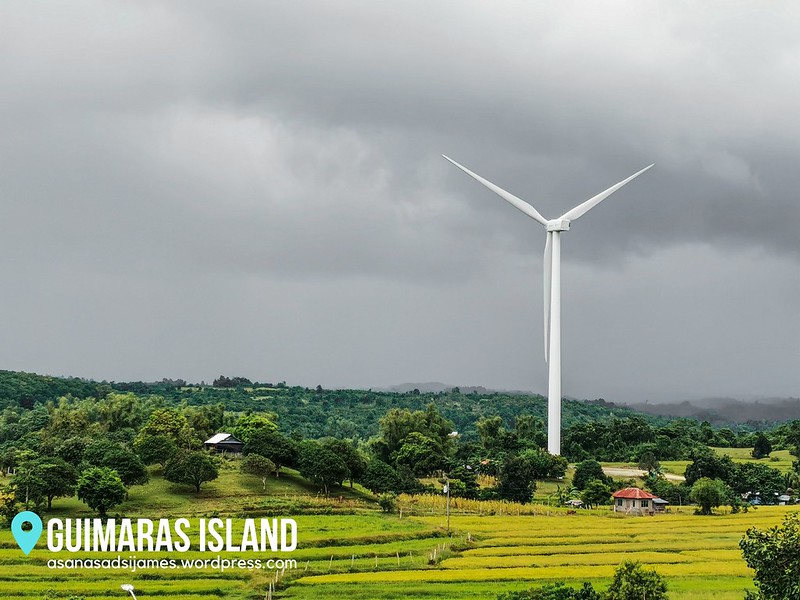 A sizeable wind farm has gone up on the eastern side of Guimaras Island. Being the first province in the Philippines to ban the use of coal and other polluting energy resources, Guimaras province shift to renewable energy and their wind farm in San Lorenzo, Guimaras is considered as one of the biggest windfarms in Southeast Asia. 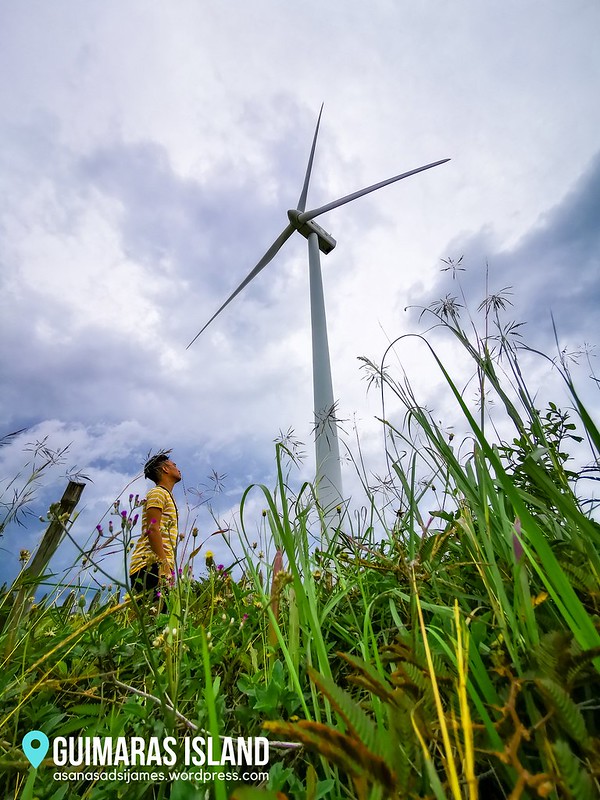 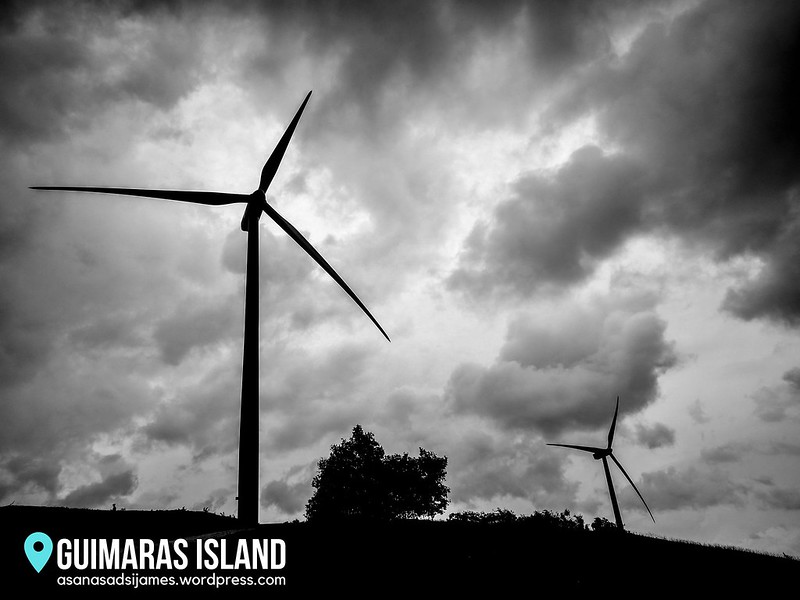 Unlike in Ilocos Region where their windmills are aligned in rows, these 54 windmills in San Lorenzo are scattered all over the vast lands over the lush hills and rice paddies. Still, it is a sight to behold to have scenery with giants fans. 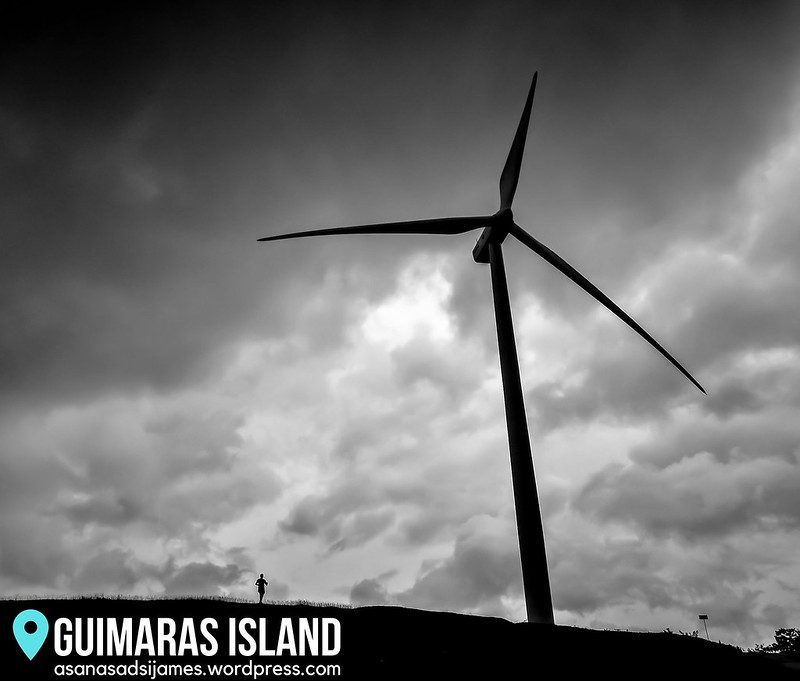 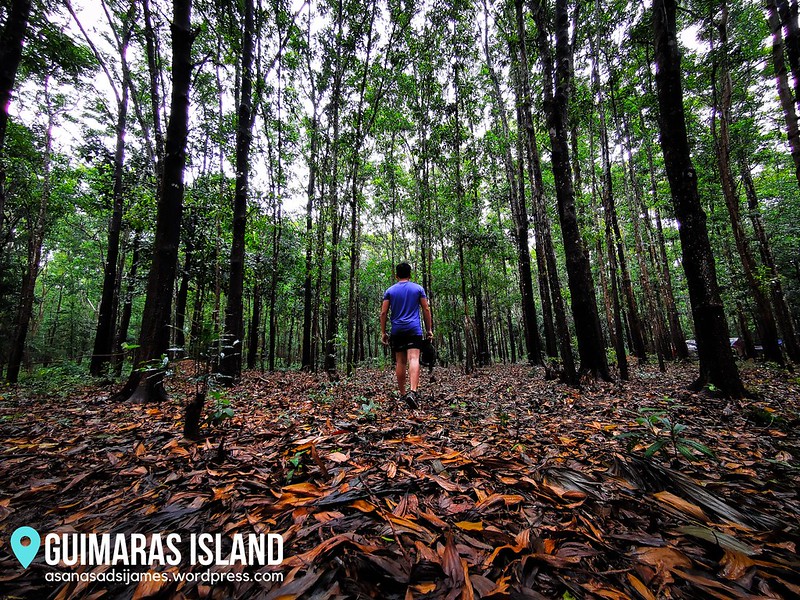 The recent addition of many attractions has pinned onto the map of Guimaras Island. Like in Bohol, Guimaras Island also has its fair share of man-made forest mainly of mahogany trees along the Guimaras Circumferential Road. Having gloomy weather that day made the forest an eerie atmosphere like all typical “lost in the woods” American horror movies. 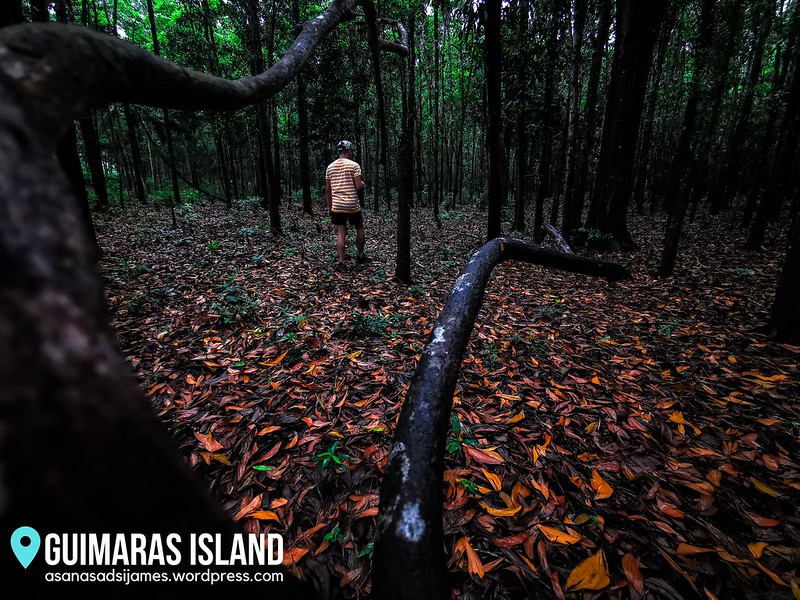 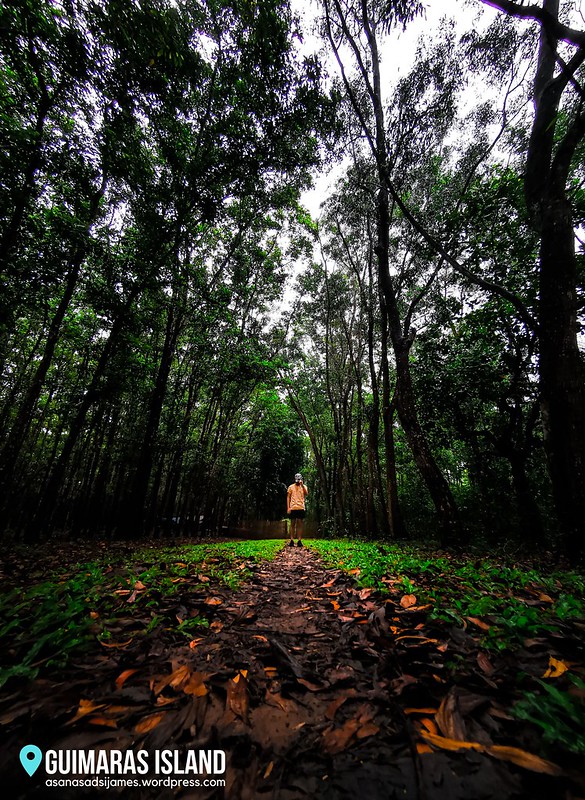 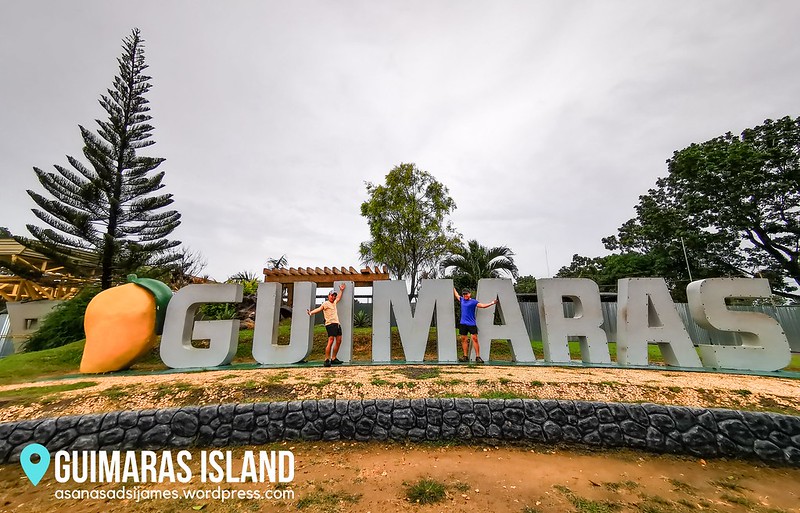 One of the stops on the tricycle tour is the giant Guimaras signage near the provincial capitol of Guimaras Island. Beside the signage is a huge mango which is an icon on the island. It is one of the most photographed landmarks in Guimaras Island. 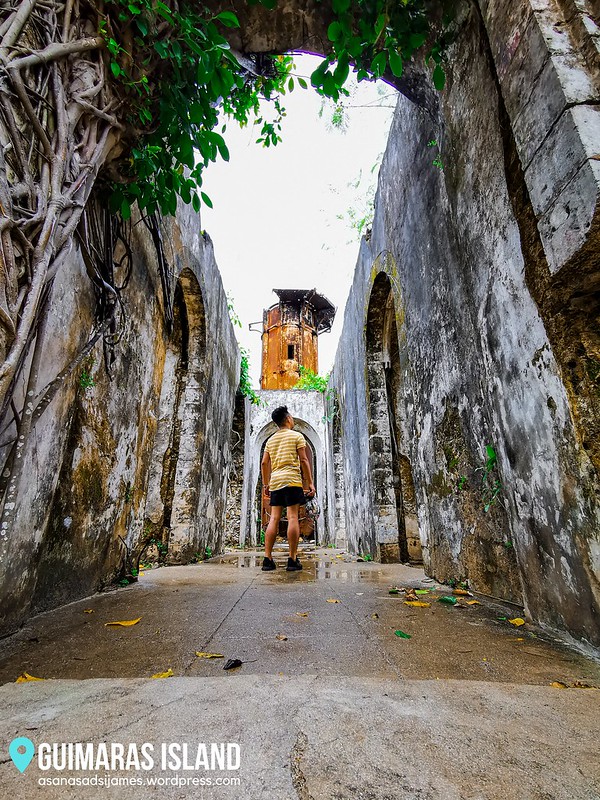 Never miss visiting one of the popular attractions in Guimaras Island, the Guisi Lighthouse. Small it may be but it is the second oldest lighthouse ever built in the Philippines after Cape Engaño Lighthouse in Palau Island, Cagayan during the colonization of Spanish invaders almost 400 years ago. Guisi Lighthouse, now in crumbles, is prohibited to climb for tourists for safety purposes. A new lighthouse beside it now stands near its ruins. 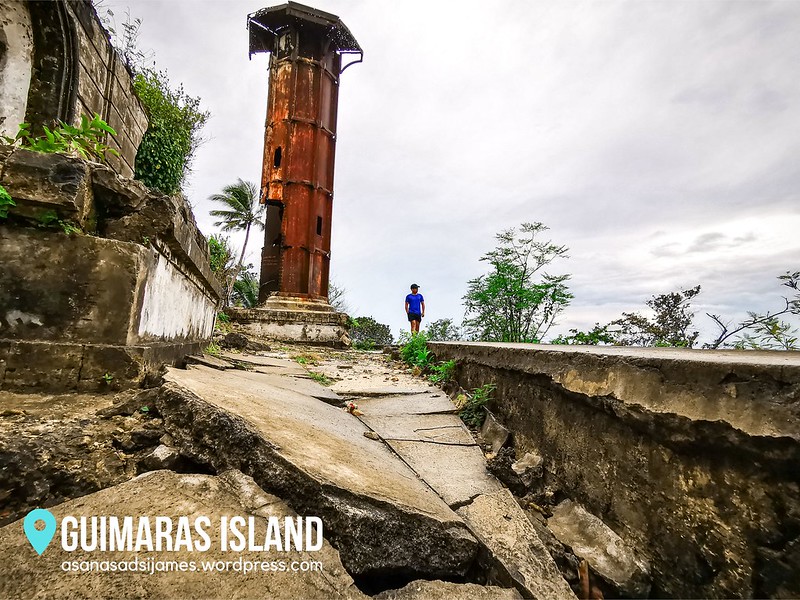 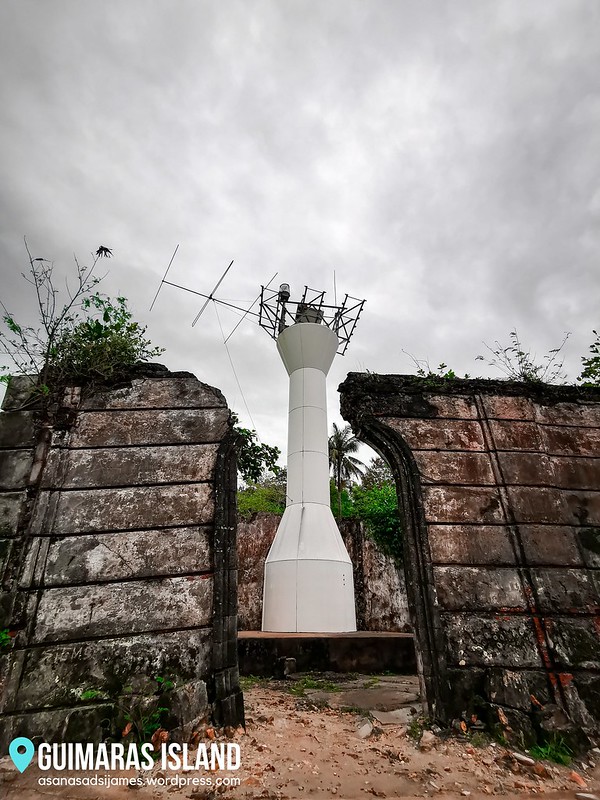 By the cliffs of Guisi Lighthouse is a sight to marvel the pristine waters of Guisi Beach. 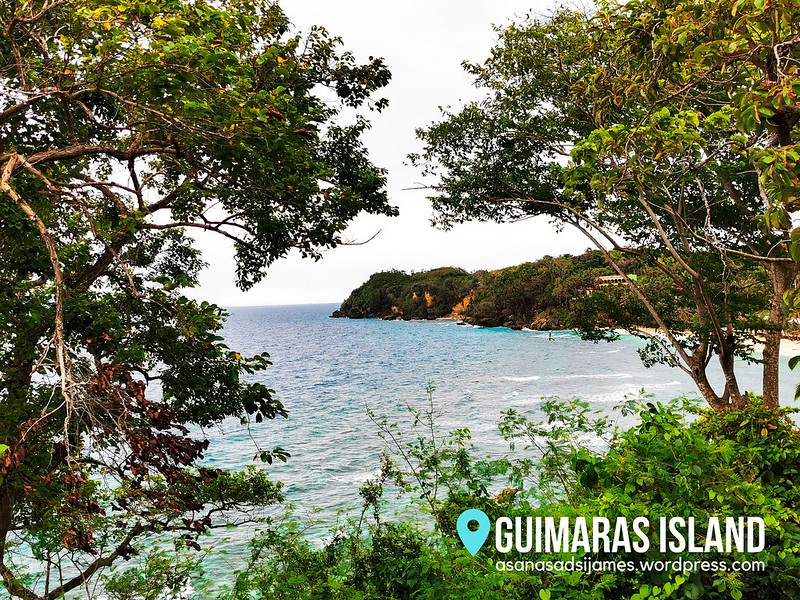 There are souvenir shops near the entrance of Guisi Lighthouse like ref magnets, shirts, and even authentic Guimarasnon pasalubong. 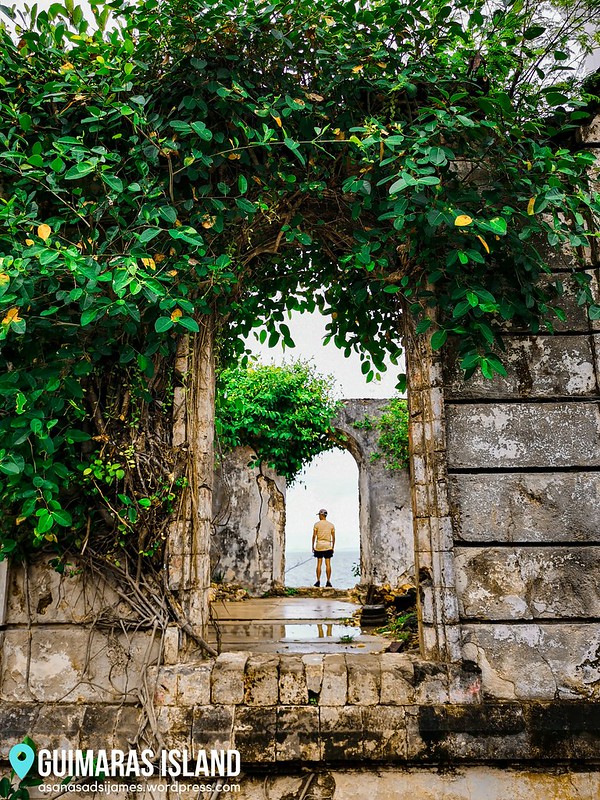 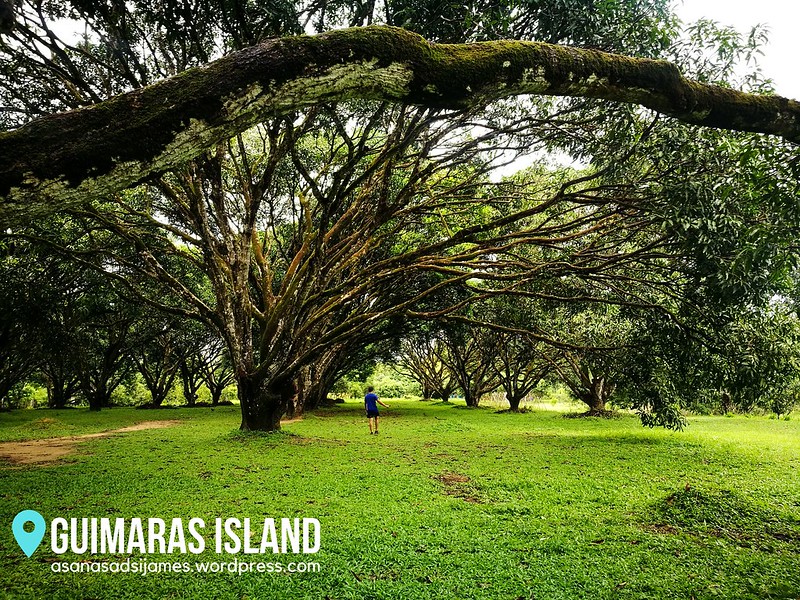 Your stay in Guimaras Island is not complete without visiting one of the mango plantations that produce the world-famous sweetest mangoes. Stroll around the vicinity and you’ll find several hundred-year-old mango trees. 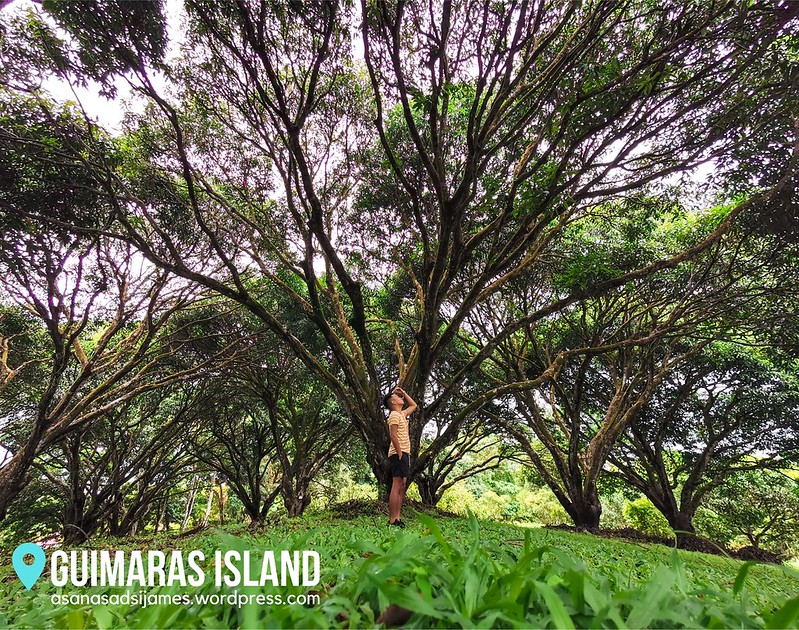 Within the center are buildings for mango research, mango production, etc. to preserve and improve the qualities of their mangoes. In the National Mango Research and Development Center, tourists can learn more about mango production in Guimaras. 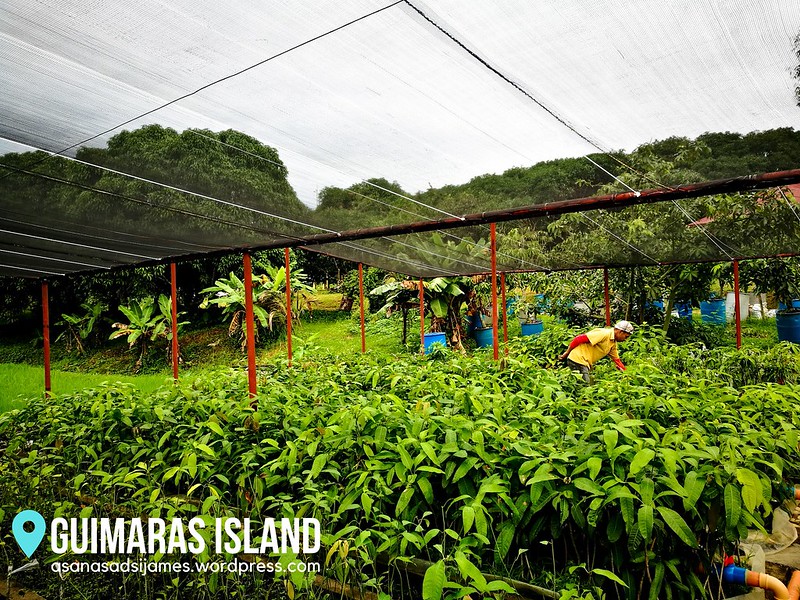 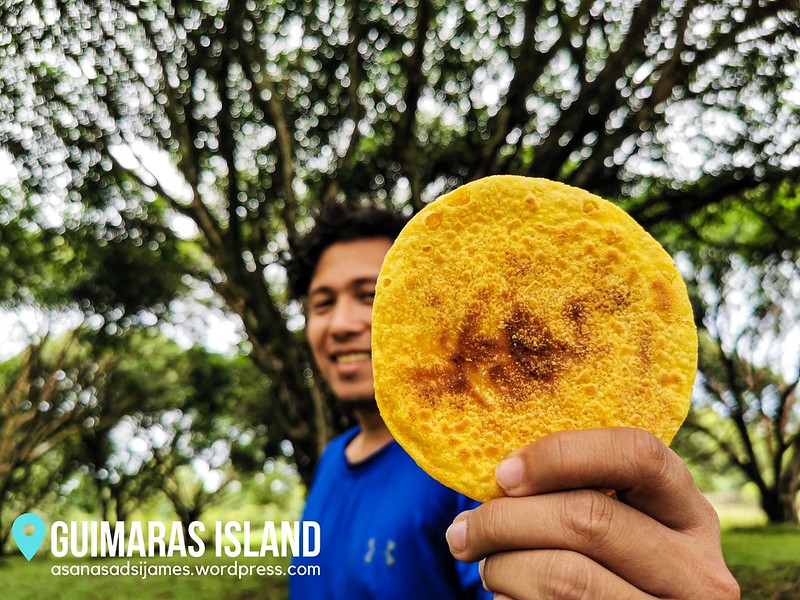 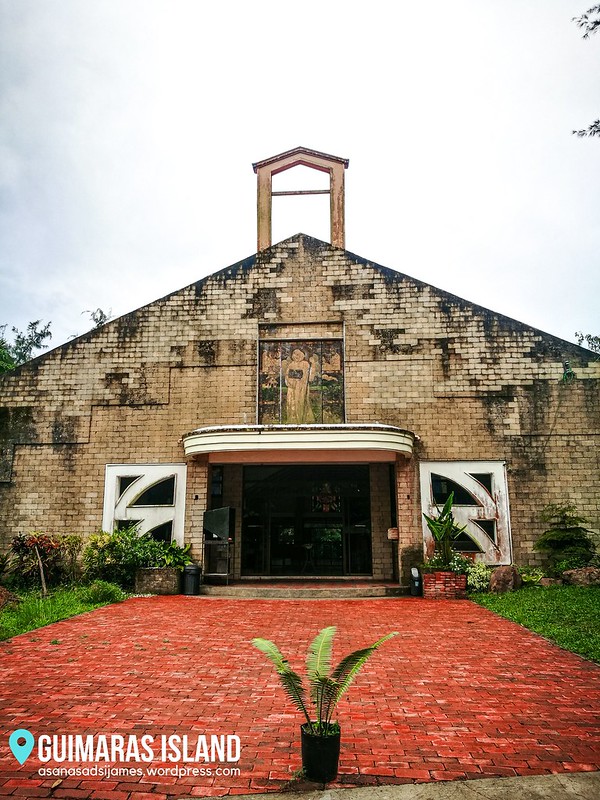 The Trappist Monastery is a peaceful retreat run by monks of the Cistercian Order of the Strict Observance. 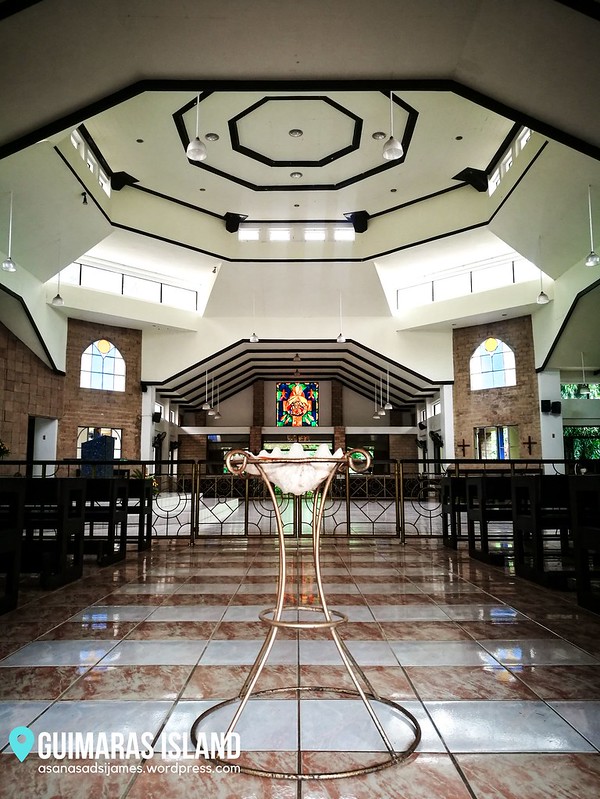 Trappist Monastery also has a small souvenir shop run by monks. It is one of the perfect places to buy authentic Guimarasnon pasalubong like several food varieties of mango, mango keychains and ref magnets, etc. 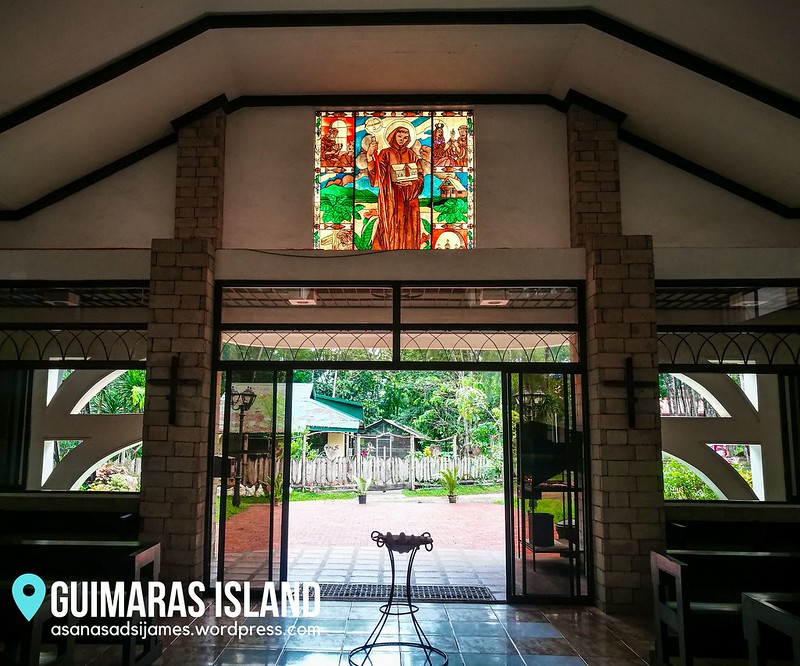 OTHER PLACES TO VISIT

It’s a shame that we only allocate one day for Guimaras Island. Well, at least we have more reasons to visit the land of the sweetest mangoes for our next to Around Panay Island Adventure. To fully explore Guimaras Island, I recommend spending at least 2 days or more in order to satisfy the adventurous souls.

HOW TO GET TO GUIMARAS ISLAND

GETTING AROUND GUIMARAS ISLAND 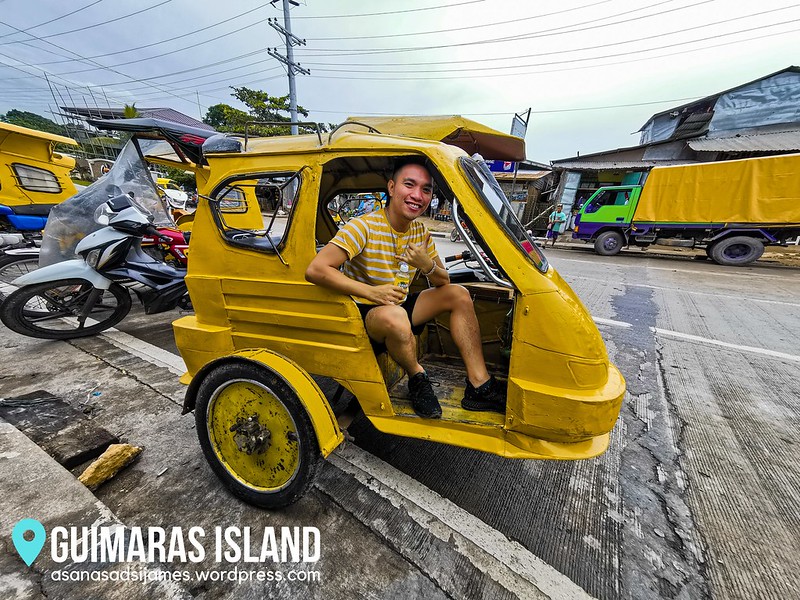 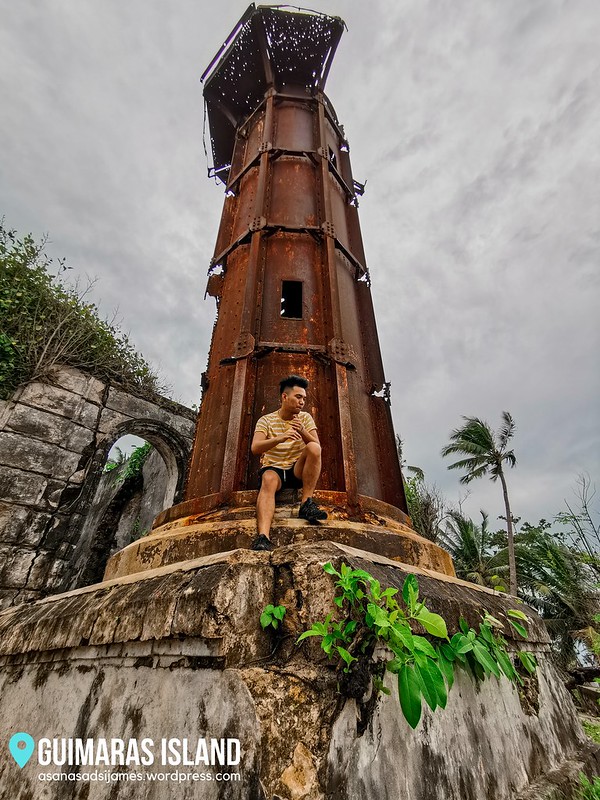 Here’s a sample detailed itinerary for our Guimaras Island for a whole day with Iloilo City as our starting point. 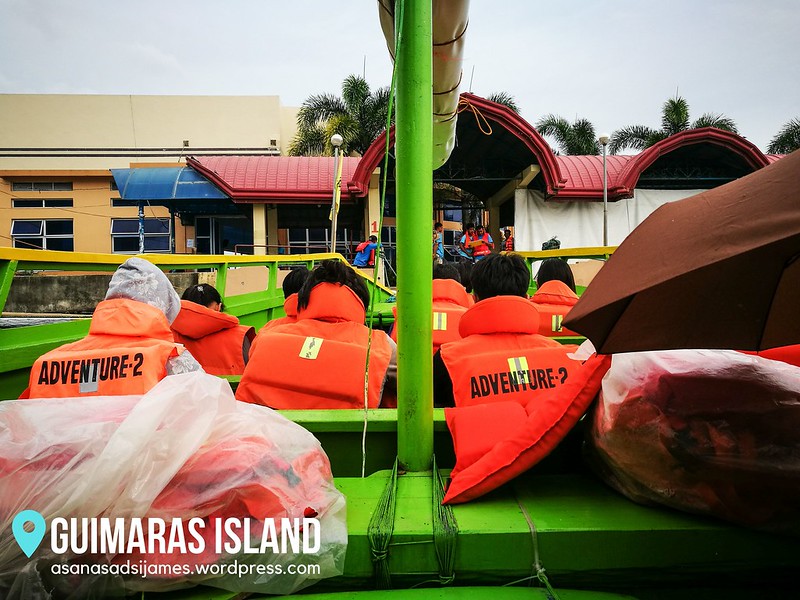 Souvenirs, plane tickets, and other miscellaneous fees are not included.